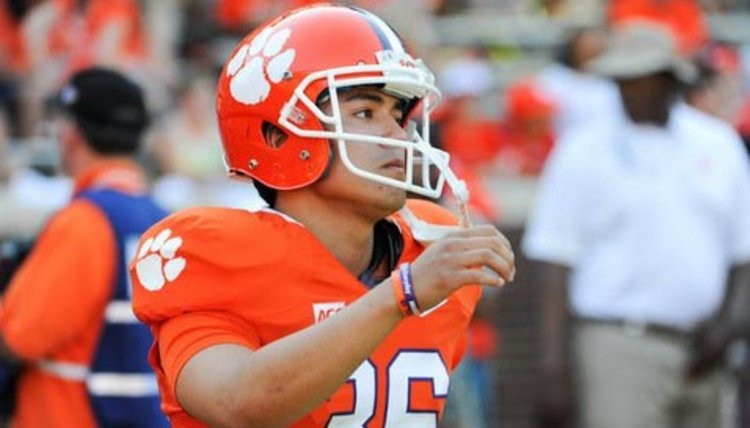 Ammon Lakip
RS Sr. Punter / Kicker
#36 5-11, 200
Alpharetta, GA
View Full Profile was available to the media for interviews on Tuesday afternoon and discussed his suspension from the football program for his arrest on June 6th for DUI Refusal and Possession of Cocaine by the Clemson University Police Department.

"First of all, I would like to start by apologizing to anyone directly and indirectly affected by my choices," Lakip said. "And then say thank you to anybody been a great support to me. I can't say how much I appreciate any words of encouragement or support in general."

The senior kicker said that he had a supportive group of people around him while he was away from the football team.

"I had my family around me, but as far as teammates they were there for me," Lakip said. "Checking in and calling - Stanton Seckinger

Jim Brown
RS Sr. Long Snapper
#76 6-4, 242
Walterboro, SC
View Full Profile , a lot of the older guys who have been around me for a while. That was really nice, and I appreciate that for sure.

Lakip talked about his big hit and fumble that gave Clemson momentum early in the third quarter.

"Adrenaline and a little disappointment in my kick because I had the wind behind me. To squib it I was pretty mad at myself so I got down there quick and then after it happened and watching it now I can't help but laugh. I'm just jumping around like a crazy person."

Lakip discussed his mindset on how he can help his team moving forward in his final season.

"When you are suspended you don't get to do to the games. Watching it on TV was very different for me. Given I have spent four years on the sidelines whether it behind Catman or playing last year. So there is definitely uneasiness, but I as far as my teammates I never received any negative comments from them or anything like that. I'm a soccer player. I look up to a lot of English players because they have great quotes. Alan Shearer, legendary striker, the game of football, obviously soccer, is not about scoring goals. It's about winning. Anything I can do to help my team. That's what I aim to do if that is just helping Greg [Huegel]. That's fine. I will do kickoffs. I'll take it. But I am going to do everything I can as a backup field goal kicker. I'm going to be the best backup field goal kicker in the nation."

He said he has learned a lot from everything we went through in the off season.

"It's definitely opened my eyes to how short life can be and how precious it is," he said. "Saturday night it was kind of like it was all worth it. The only way this could have been a bad experience is if I didn't learn from it. That is what I am aiming to do every day."