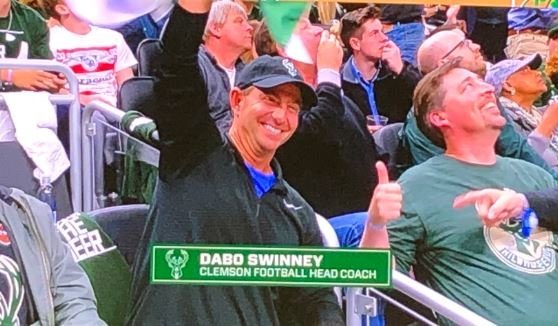 The where in the world is Dabo Swinney tour continues as he was sighted watching the Bucks clinch their playoff series over the Boston Celtics 116-91 on Wednesday night.

The NBA and MLB home teams are currently 5-0 this week with Swinney and his group in attendance. That is pretty interesting because they means he is basically the reverse Drake (team loses when he supports a team). Invite Swinney to a game and your team will more than likely win.

Swinney was shown on the jumbotron during a timeout in the following video:

All eyes on Milwaukee pic.twitter.com/nPmwPbB4K3

Swinney snapped a photo with the rapper celebrity Drake earlier this week, and last night Swinney got a picture with Green Bay Packer great Aaron Rogers.

Earlier in the day, Swinney took in a Brewers' win over the Nationals:

If it’s a live sporting event there’s a 85% chance Dabo Swinney is there this week. pic.twitter.com/mIhc1uTg3H

Nobody is using this spring and winning more right now than @ClemsonFB coach Dabo Swinney. His NBA playoff tour is recruiting genius. pic.twitter.com/B7jhjXkgnY