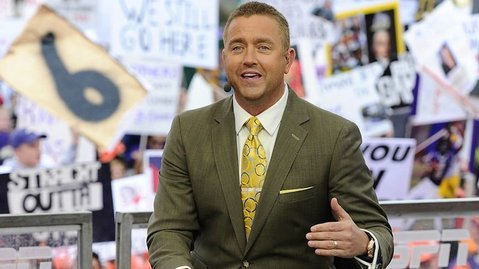 Everyone seems to be upset about something nowadays.

ESPN analyst Kirk Herbstreit had to apologize to several Ohio State fans that were upset by his 'inappropriate responses' on Twitter after Clemson's comeback win over the Buckeyes in the 2019 Playstation Fiesta Bowl.

"Like to apologize for my inappropriate responses to some people last week," Herbstreit posted. "People were upset and laying into me, and I responded only making things worse. Like to apologize to each of those people and to all my followers. I should be better than that, and I will. I appreciate it."

Here are some of the tweets that Herbie got so many Ohio State fans fired up about:

It’s truly amazing people like you are real. If ESPN has its way
Ohio St would be in EVERY national championship game!Ohio St=RATINGS!!!!
The ridiculous notion that ESPN is out to get the B1G or Ohio St is comical.
People cannot be this ignorant. #Sheep https://t.co/ZbTOjtuC4j

I said what I thought during the game. Looked like a catch and fumble to me. I don’t understand how it was overturned. But there were a lot of things that impacted the outcome of the game. But that was the one call that I didn’t agree with at all. https://t.co/OrRIZ3VSJu

AGAINNNNN Phan I said on air and I said it on here the missed the call. Was shocked they reversed the call. How else do you recommend I be more clear???
As far as Urban he’s a friend of mine-I don’t control what everyone at Espn says or does. https://t.co/yYLy4ZizDL

Bizarre you actually think this is true. Truly ridiculous. https://t.co/viUDBnPmQv

Ohio State rates better than ANYYYYYYYYYYYYYYY team in CFB!!!!!!!!
To think ANY network wouldn’t want them is laughable. https://t.co/2UgsIOgIt2

You’re either deaf or don’t have closed caption. Or better yet you DO HAVE closed caption and can’t read. Get your ass outta here!!! https://t.co/X3ttMw5y4n

Fair question. Because they represent 5% of an otherwise AWESOME and passionate fan base that gets it. Most the idiots didn’t even go to school there. They just like to attack anyone and everyone.
Complete jackasses that embarrass a fantastic fanbase. https://t.co/pgXo9oRoDs