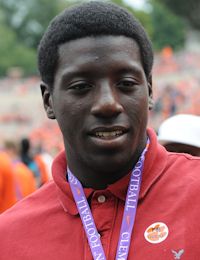 Josh Brown
Fr. Defensive Tackle
# 6-5, 290
Aiken, SC
View Full Profile from his scholarship after he failed to academically qualify. It was thought he was headed to Marshall, but that is not a done deal according to the Aiken Standard and his mother, Shirley Brown.

"Marshall is still in play, but hopefully he'll go to someone's campus and go to a university," Shirley Brown said. "Marshall's our No. 1 option for right now."

Shirley Brown didn't specify what schools, other than Marshall, her son is considering. Josh Brown had previously stated he didn't want to go to a prep school or junior college for a year and transfer to a four-year college. West said he was unaware of any other possible colleges Brown might be considering.

Shirley Brown did say that a decision would likely be made by next week. It will have to come soon as time is starting to run short before Josh Brown will have to report to a campus and enroll in school.