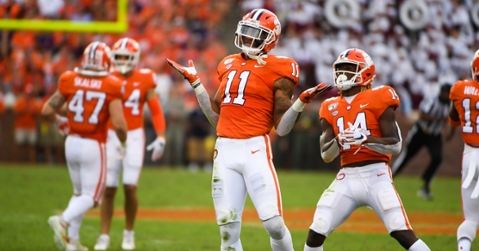 Clemson linebacker Isaiah Simmons was honored as the nation's top linebacker with the Butkus Award on Sunday, the school announced.

He is a first Butkus Award winner for the program.

Simmons, also the ACC defensive player of the year, has tallied 91 tackles with two interceptions, seven sacks and 14 tackles for loss.

The Butkus selection committee stated: “Simmons is one of the most versatile athletes to play the linebacker position. He's an exceptional athlete with unique length and makes plays at all three levels, with terrific rush ability, blitz timing, cover skill and tackling range. He's a modern-day linebacker with special match-up skills. For as good of a football player as he is, he's a better person and will represent the Butkus Award with class.”

Following Simmons was Evan Weaver of California with 20 percent of the weighted vote, Zack Baun of Wisconsin (17%) Jordyn Brooks of Texas Tech (15%) and Micah Parsons of Penn State (13%). Logan Wilson of Wyoming and Kenneth Murray of Oklahoma also received votes.

The Butkus Award® is presented by the Butkus Foundation, a 501c3 non-profit organization which advances health and wellness through special initiatives. This includes the I Play Clean® program encouraging athletes to play using their natural ability, and the Butkus Takes Heart™ program encouraging preventive heart scans and screening among adults.

The Butkus Award a member of the National College Football Awards Association (NCFAA) which encompasses college football’s most prestigious awards. NCFAA’s 25 awards have honored more than 800 since 1935.

Today, the Butkus family formally announced what we already knew: Isaiah Simmons is the best linebacker in college football.