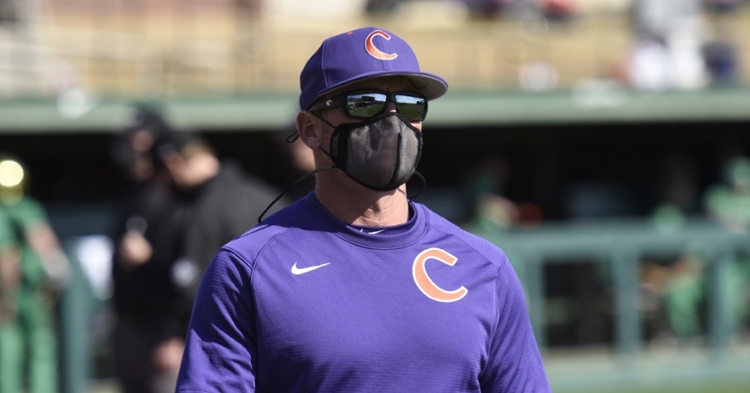 Clemson's early ACC record is evened up at 1-1. (ACC photo)

CLEMSON, S.C. - Left-hander John Michael Bertrand tossed 7.0 strong innings to lead Notre Dame to a 3-1 victory over Clemson at Doug Kingsmore Stadium on Saturday afternoon. The Fighting Irish, who evened the series 1-1, improved to 3-2 overall and 3-2 in the ACC. The Tigers, who saw their 10-game home winning streak dating to 2020 come to an end, fell to 5-3 overall and 1-1 in ACC play.

Bertrand (1-0), a graduate transfer from Furman, earned the win by allowing just three hits, one run and two walks with eight strikeouts in 7.0 innings pitched. Will Mercer pitched the final 2.0 innings to record his first save of the year. Tiger starter Ty Olenchuk (1-1) suffered the loss, as he surrendered three hits, two runs and two walks with three strikeouts in 4.0 innings pitched.

Niko Kavadas laced a two-run homer in the first inning, then Cooper Ingle, in his first career game, cut the lead in half with an RBI groundout in the fourth inning. Carter Putz's run-scoring double in the fifth inning doubled Notre Dame's lead.

The series concludes Sunday at noon on ACCNX.

BIG play on defense by @mdwagz9 with the bases loaded in the third inning to escape a jam! ?? ??

In the 7th, @zprajzner27 made an unbelievable play to rob Clemson of a hit!

No. 25 'Canes run away with series opener over Tigers
Post your comments!