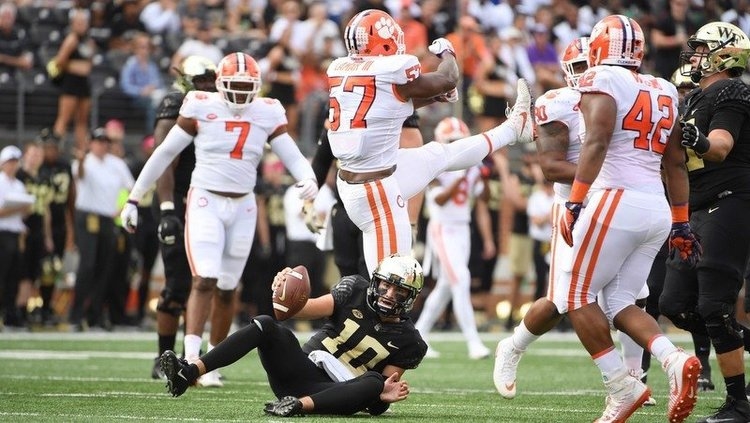 Clemson’s 60-point margin of victory was the program’s largest in conference play in school history.

The win was Clemson’s 14th win of 60 points or more in school history and the program’s first since a 66-point win against South Carolina State in 2014.

Clemson gained 698 yards of offense, the fifth-most in a game in school history. Four of the program’s five highest single-game yardage totals have come under Head Coach Dabo Swinney.

Clemson’s 471 rushing yards represent the most in a single game under head coach Dabo Swinney, surpassing the previous high of 416 set in that contest against Miami.

Clemson’s 471 rushing yards are the fourth-most yards on the ground in program history and the most since Oct. 31, 1981 when the Tigers amassed 536 rushing yards against Wake Forest.

Clemson rushed for 200 yards in a fourth consecutive game for the first time since games 7-10 of the 2015 season against Miami, NC State, Florida State and Syracuse. The two four-game stretches mark the program's longest under Head Coach Dabo Swinney.

With 1,321 yards in its last four games, Clemson has now reached 1,000 rushing yards in a four-game span for the first time since rushing for 1,101 yards in the first four contests of last season.

Running back Travis Etienne finished the game with 167 total yards on offense, tallying 16.7 yards per carry and three touchdown runs (two for 50+ yards).

Between Etienne, Choice and Dixon, Clemson had three players reach the 100-yard rushing mark in a single game for only the sixth time in team history. The game marked Clemson’s first time accomplishing the feat since James Davis (143), C.J. Spiller (127) and Demerick Chancellor (113).

The performance marked the first time in school history Clemson has had three players exceed 125 rushing yards in a game and the first time two players have surpassed the 160-yard mark.

With 654 yards in the last four games, Etienne broke Woodrow Dantzler's school record for most rushing yards in a four-game span (623 in 2000).

Etienne became the first Clemson player to rush for at least three touchdowns in consecutive games since Travis Zachery against Duke (four) and Georgia Tech (three) in 1999.

Etienne has now rushed for at least one touchdown in six consecutive game to add to his career-long streak of games with a rushing touchdown.

Etienne became the first Clemson player to rush for a touchdown in six straight games since Wayne Gallman's eight-game streak to end the 2016 season.

Etienne became the first Clemson player to rush for 100 yards in four straight games since Woodrow Dantzler against Wake Forest, Virginia, Duke and NC State in 2000. He is one 100-yard game shy of the school record of five consecutive 100-yard rushing games, set by Kenny Flowers in 1985 and by Raymond Priester in 1996-97.

Etienne opened the scoring in the first quarter on a 59-yard touchdown run on the fourth play of Clemson’s fourth drive.

In one game alone, Etienne eclipsed the number of rushing touchdowns of 50 yards or more accrued in 15 games by the 2016 national champion Clemson squad, which recorded only one rushing touchdown that season.

Playing on his 19th birthday, quarterback Trevor Lawrence completed 20-25 passes for 175 yards with two touchdown passes and no interceptions for a pass efficiency rating of 165.2.

On a 55-yard strike to wide receiver Justyn Ross, Lawrence recorded his 10th touchdown pass of the season and became only the fourth freshman (first-year or redshirt) in Clemson history to throw double-digit touchdown passes, joining Kyle Parker (20 in 2009), Deshaun Watson (14 in 2014) and Charlie Whitehurst (10 in 2002).

The touchdown reception was Ross’ fourth of his freshman campaign, three of which have come from 50 yards or longer (57 vs. Georgia Southern, 53 at Georgia Tech, 55 at Wake Forest).

Ross is the first Clemson player to score three receiving touchdowns of 50 yards or more in a single season since Artavis Scott in 2014 (four).

Wide receiver Tee Higgins set a new single-season career high in touchdown receptions with his third touchdown catch of the season on a 20-yard scoring grab from Lawrence in the second quarter.

Choice recorded a 64-yard touchdown run in the third quarter. It was the longest touchdown run of his career, surpassing a 39-yarder against Louisville last year.

Dixon recorded a 65-yard rushing touchdown in the third quarter, the first touchdown of his career.

Quarterback Chase Brice threw the first touchdown of his career in the fourth quarter, connecting on a two-yard scoring pass for Diondre Overton’s third touchdown reception of the season.

With Muse’s interception, Clemson forced a takeaway in a 14th consecutive contest, the program's longest streak since a 15-game stretch across the 2012-13 seasons.

Wide receiver Hunter Renfrow extended his streak of consecutive games played with a reception to 34.

Linebacker Tre Lamar recorded his first sack of the season — the sixth of his career — on Wake Forest’s opening drive. It was his first sack since his highlight reel sack/fumble against Florida State in 2017.

Lamar added his second sack of the game in the third quarter, matching his career high set against Georgia Tech last season. It marked his second career multi-sack game.

Defensive end Clelin Ferrell added his sixth sack of the season in the first quarter. He entered the day ranked tied for third in the country in career sacks among active players.

With the sack against Wake Forest, Ferrell moves into ninth in Clemson history for career sacks.

Defensive lineman Christian Wilkins appeared in his 50th career game, the most among active Clemson players.

Clemson led 28-0 at halftime and has now won 57 of its last 59 when leading after two quarters.

Clemson held Wake Forest to 71 passing yards and has now held four of its first six opponents in 2018 to double digits in passing yards.

Clemson has now opened 6-0 for the fourth straight season and for the sixth time in the last eight years.

Clemson earned a fifth straight road win at Wake Forest to tie for the second-longest road winning streak against the Demon Deacons (five, 1978-90) in series history.

Clemson improved to 25-10-1 all-time in games at Wake Forest. Wake Forest represents one of two road venues in which Clemson has won 25 games all-time (51 wins at South Carolina).

Clemson has now won 49 of their last 53 games overall.

Clemson won the 24th of its last 25 games against ACC Atlantic Division opponents.

Clemson earned its 24th victory in its last 27 games away from home, including neutral site contests.

Clemson has now won 58 of its last 60 against unranked teams.

Swinney improved to 10-0 as a head coach against Wake Forest. Wake Forest is one of five ACC schools against which Swinney is undefeated as head coach, a list that also includes Duke (2-0), Louisville (4-0), Virginia (3-0) and Virginia Tech (5-0).

Clemson is now 50-1 when rushing for at least 200 yards under Dabo Swinney.

Clemson has a perfect 38-0 record when both passing and rushing for at least 200 yards under Swinney.

Clemson has now registered a 36-2 record when producing a 100-yard rusher.

Clemson has now won 60 straight games when holding teams under 23 points dating back to 2010.