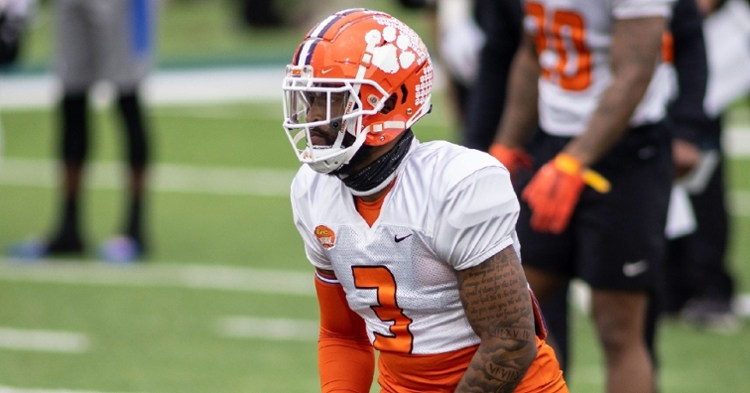 Rodgers is making a name for himself this week. (USA TODAY Sports-Vasha Hunt)

Clemson's reps at the Senior Bowl this week are shining before NFL coaches and scouts in Mobile, Alabama.

WRU has two working on their draft stock in Amari Rodgers and Cornell Powell. NFL.com had them both among the five stars from Wednesday's action.

"He's (Powell) carried the momentum from the season into practices this week. I saw him get on top of coverage and track the ball really well on Wednesday. He was very efficient at the top of his routes," NFL.com analyzed.

On Rodgers: "I usually prefer a little more variety in my Senior Bowl standouts, but I simply can't leave Rodgers off the list. I loved his crisp route running on Wednesday. He has strong hands and a solid overall feel for the game. He was Trevor Lawrence's top target this past season, and he has good bloodlines, too. His father is former Tennessee quarterback Tee Martin, who's been coaching in the college ranks for more than a decade. Rodgers reminds me of Randall Cobb. The Houston Texans wide receiver has had a long, successful run in the league, and Rodgers has similar potential."

Rodgers totaled a team-best 77 catches for 1,020 with seven touchdowns last season, while Powell also posted a career-best year with 53 receptions for 882 yards and seven TDs.

The Senior Bowl game is set for 2:30 p.m. Saturday on NFL Network.

#Clemson WR Cornell Powell with an absolutely beautiful release to connect with #TAMU QB Kellen Mond at the #SeniorBowl pic.twitter.com/9vgDhej9rm

Clemson’s Cornell Powell with the nice concentration on this pass from Wake’s Jamie Newman. #SeniorBowl pic.twitter.com/sJT1wUcg55