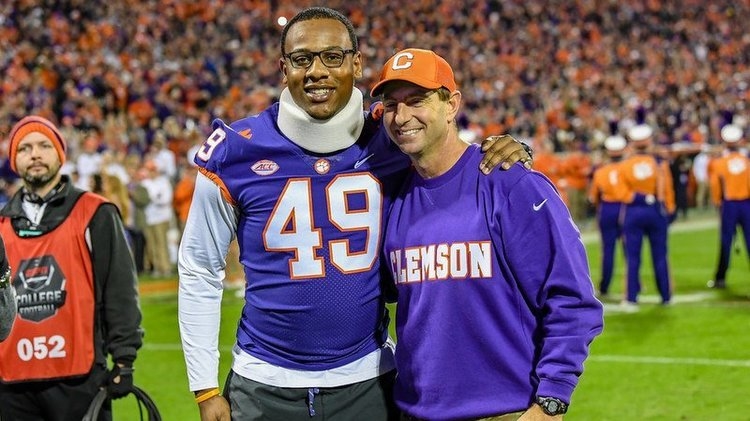 The Piccolo Award has been given annually since 1970 in memory of the late Brian Piccolo to the "most courageous" football player in the ACC. As a standout running back at Wake Forest, Piccolo was the ACC Athlete of the Year in 1965 and played for the Chicago Bears before his career was cut short when he was diagnosed with cancer. His courageous fight against the disease was an inspiration to the Bears and the entire football community.

Yeargin will be recognized this weekend during activities surrounding the 2019 ACC Football Championship Game between Clemson and Virginia, which is set for Saturday at 7:30 p.m. at Charlotte’s Bank of America Stadium.

In June of 2017, Yeargin, who began his college career at Clemson and had just completed his second season, was involved in a car accident near Greenville, South Carolina. His injuries included fractures of the C5 through C7 vertebrae at the base of his neck and a concussion.

Yeargin graduated in December of 2017, enrolled in a master’s program and was set to return to action for the Tigers in 2018, but symptoms related to the accident persisted and he decided to retire from football. Yeargin underwent surgery and became a student coach for the Tigers’ national championship run, but he continued to rehab under the watch of the Clemson strength and conditioning staff.

He got engaged, became a father and landed a job offer as he neared completion of work on his master’s degree. Then, during a routine check-up last April, he was surprisingly cleared to return to the playing field.

Yeargin, a 6-foot-4, 280-pound native of Fort Lauderdale, Florida, entered the transfer portal and landed at Boston College. Yeargin not only found his way back to the playing field this fall, he appeared in every game as a regular in the Eagles’ defensive line rotation while making six starts.

Nominated for the 2019 Capital One Orange Bowl-FWAA Courage Award after making his first start for Boston College and recording a tackle for loss in a win over NC State on October 19, Yeargin finished the regular season with 12 total tackles, including six for lost yardage, and a quarterback hurry.

“This is a tremendous honor for Richard to be named the Piccolo Award recipient as the ACC’s most courageous player,” said Steve Addazio, who coached Yeargin at BC this past season. “He has been a tremendous addition to our football team both on and off the field, and has shown tremendous courage and passion in returning to the field. We could not be happier for him.”

Yeargin becomes the second student-athlete from Boston College to earn the ACC’s Brian Piccolo Award and the first since linebacker Mark Herzlich in 2010.

It's more than just the No. 2 on his @BCFootball jersey. This is Richard Yeargin III's 2nd chance. pic.twitter.com/UjxYJbSwXB