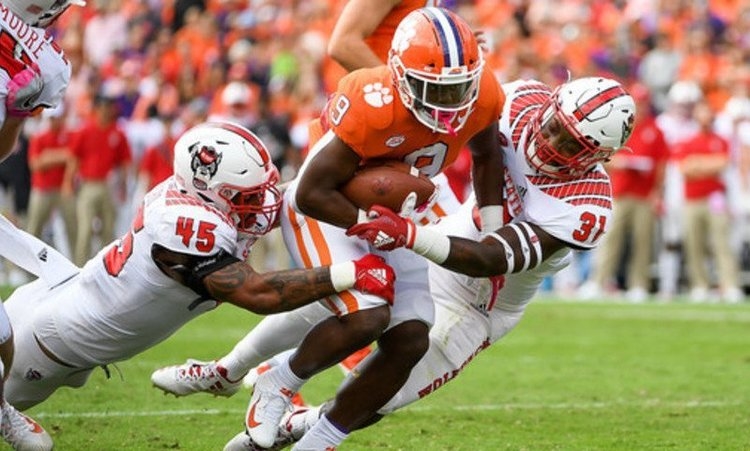 CLEMSON, S.C. — The PwC SMU Athletic Forum announced today that Clemson running back Travis Etienne has been named a semifinalist for the 2018 Doak Walker Award, which annually honors the nation’s top college running back.

This season, Etienne has rushed 127 times for an ACC-best 1,076 yards with 15 rushing touchdowns and caught nine passes for 56 yards with a receiving touchdown. Entering this week’s contest against Duke, he holds Top 10 national rankings in rushing touchdowns (15, fourth), total touchdowns (16, tied for fourth), points per game (9.6, tied for seventh) and yards per carry among qualified backs (8.47, eighth), in addition to producing explosive runs of 20-plus yards (15, second) and 30-plus yards (eight, tied for third) at an elite rate.

Etienne’s running on opponents has resulted in a run on the school’s record book. Against Syracuse, Wake Forest and NC State, he became the first player in school history to record three rushing touchdowns in three consecutive games. And among Clemson players with at least 1,000 career rushing yards, his 7.87 career yards-per-carry average ranks as the best in school history, ahead of the school record of 5.92 set by Jackie Calvert from 1948-50 and ahead of active Clemson running back and teammate Tavien Feaster (6.13).

Votes will be cast after this week’s games to determine the three Doak Walker Award finalists who will be named on Monday, Nov. 19. The 2018 Doak Walker Award recipient will be announced live on ESPN on Thursday, Dec. 6.