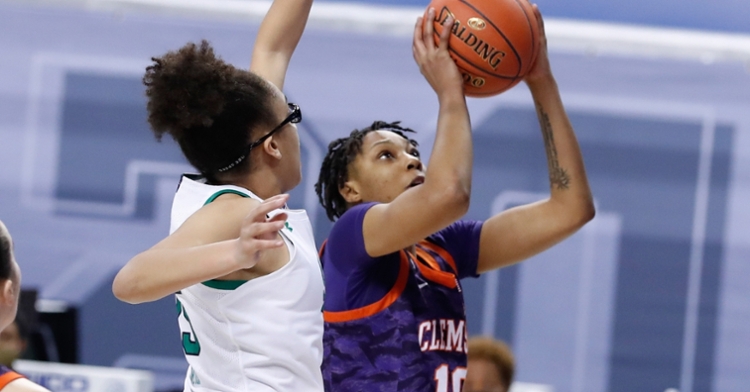 GREENSBORO, N.C. — With their third straight triumph over Notre Dame, Clemson came from behind and won a thriller in its ACC Tournament opener at Greensboro Coliseum on Thursday. The 11th-seeded Tigers trailed by double digits in the second half but chipped away at the sixth-seeded Fighting Irish before taking the lead for good late in the contest, which Clemson won 68-63.

In the shooting department, Clemson (11-12) recorded a field goal percentage of 34.9, while Notre Dame (10-10) shot 49.0 percent from the field. The Tigers made five 3-pointers and went 19-for-24 at the free throw line. They also won the rebounding battle 38-34 and outscored the Irish 18-4 in second-chance points. Furthermore, Clemson tabbed 14 assists and 13 steals.

Freshman phenom Gabby Elliott showed out in her ACC Tournament debut, making 10 shots from the floor and amassing a career-high 25 points. She also secured seven rebounds and nabbed six steals. Kendall Spray poured in a trio of shots from beyond the arc and finished with 13 points to go along with her four steals. Delicia Washington collected 11 points, seven assists and five boards, and Amari Robinson registered 10 points and eight rebounds. For Notre Dame, Maddy Westbeld scored a team-leading 21 points.

In the first quarter, a steal by Elliott led to her laying it in on the other end to give Clemson a 6-3 lead. She later put the Tigers up 13-11 with a layup made possible by a stellar pass from Washington after she corralled an offensive rebound. Notre Dame took a 17-15 lead into the second quarter. Spray knocked down a couple of 3-pointers in the second period, but the Fighting Irish sported a 36-31 advantage at the break. On Clemson's final possession of the first half, Destiny Thomas secured an offensive board and proceeded to fire a pass to a leaping Washington, who caught the rock and banked in a shot while airborne.

The Tigers went on to outscore the Fighting Irish 19-18 in the third quarter. Notre Dame led 47-37 before a 5-point swing by Clemson, which featured Spray making a pair of free throws following an intentional foul and Thomas then netting a trey. The Irish increased their lead back to 10, but the Tigers responded with an 8-0 run capped off by a 4-point play via Elliott, who made a three-ball from the corner while being fouled. At the start of the fourth quarter, Clemson trailed 54-50, and the Tigers took their first lead of the second half with 1:28 remaining. A contested layup by Elliott provided Clemson with a 61-60 edge. The most impressive shot of the game came with 17.6 seconds left, when Spray beat the shot clock by miraculously banking in a 3-pointer. The Tigers led 64-60 at that point and wrapped up their 68-63 victory soon afterward.

Next up for Clemson in ACC Tournament play is a quarterfinal matchup with Georgia Tech (14-7). The Tigers will square off against the third-seeded Yellow Jackets at 8:30 p.m. on Friday, March 5. Georgia Tech won both meetings with Clemson in the regular season. Friday's tilt will air on a regional sports network (RSN).

Clemson vs Notre Dame Box Score
Comment on this story