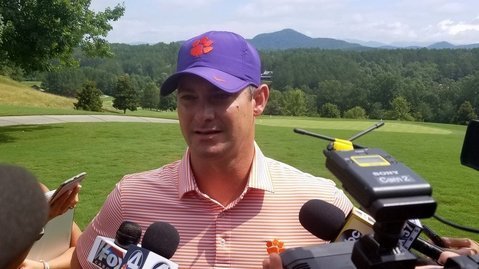 Clemson co-offensive coordinator Jeff Scott is finalizing a five-year deal to become the next head coach of South Florida according to multiple reports including ESPN.

The report said the deal should be completed later on Monday for Scott to become the fifth head coach in USF history.

Scott, who co-led the Clemson offense with Tony Elliott, is the first departure from Clemson’s offensive staff since Chad Morris took over the SMU program in December 2014.

He was a Broyles Award finalist for the nation's top assistant in 2018 and had been on Clemson's staff since promotion to a receivers coach role when Dabo Swinney took over 2008. Scott, a former Clemson player, also coached with Presbyterian College and Blythewood High School (S.C.), where he won a state title.

Scott has ties to Florida through his dad, Brad Scott, who coached high school football in the Sunshine State and then on Florida State’s staff from 1983-93.

USF athletic director Michael Kelly was a former associate commissioner of the ACC in football before joining the Playoff in 2012.

USF fired Charlie Strong recently after three seasons and going 21-16 in that span. However, he went 4-14 in the past 18 games and they decided to pull the trigger on a new head coach.

USF, in the American Athletic Conference, won double-digit games in back-to-back seasons from 2016-17 under Willie Taggart then Strong.

Jeff has extensive ties to the state + has done a terrific job recruiting athletes from Florida to Clemson. AD Michael Kelly also has longstanding ties to the ACC + CFP. We'll see how this impacts playoff preparations. https://t.co/DHAYjJcQTT

Sources: Jeff Scott is likely the next head coach at #USF, barring a last-minute change. Clemson co-OC has been a hot commodity. Bulls getting an up-and-coming coach.

Scott becomes the first of Clemson’s three in-demand coordinators to leave for a head coaching job, and the first assistant Dabo Swinney has lost since the end of the 2016 season.