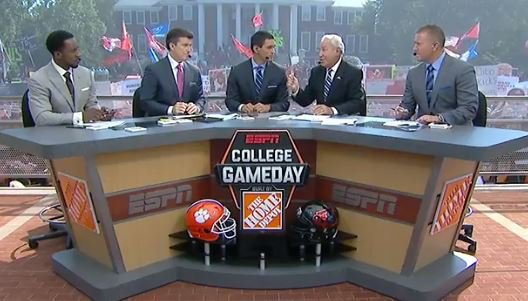 ESPN formally announced its College GameDay show will be aired live in Clemson on Thursday, Aug. 29, ahead of the season opener with Georgia Tech.

The show will be televised starting at 6 p.m. on ESPN and the new ACC Network and shift to the ACC Network only for the 7 p.m. hour before the 8 p.m. kickoff. The GameDay set will be located on the concourse level of Memorial Stadium.

Clemson has hosted the show five times in all (4-1 in those games), with it last coming to town in October 2016 for the Clemson-Louisville game (a 42-36 Tigers win).

ESPN will have over nine hours of live coverage from Clemson on Aug. 29, starting with the (Mark) Packer and (Wes) Durham show there from 7-10 a.m. on ACC Network and the ACC Network 'Huddle' show will have a one-hour postgame show from the stadium. That show features former Tiger offensive lineman Eric Mac Lain as an analyst.