Swinney and Co. have collected a ton of hardware in the last decade

The Dodd Trophy, college football’s most coveted coaching award, celebrates the head coach of a team who enjoys success on the gridiron, while also stressing the importance of scholarship, leadership and integrity – the three pillars of legendary coach Bobby Dodd’s philosophy.

The midseason watch list was created through a selection process by the Bobby Dodd Coach of the Year Foundation and the Chick-fil-A Peach Bowl, taking into consideration each program’s Academic Progress Rate (APR), current performance during the 2020 season and each coach’s commitment to service and charity in the community.

Considering The Dodd Trophy represents more than just a coach’s performance on the field, a coach in his first year, who has not had a full season to establish his own impact on APR and the local community, is not eligible to win.

“It’s been an unprecedented season so far this year and we had to consider a variety of factors when compiling this list,” said Jim Terry, chairman of the Bobby Dodd Coach of the Year Foundation. “At the end of the day, we selected the coaches who we felt truly embody Bobby Dodd’s three pillars of scholarship, leadership and integrity, both on and off the football field.” 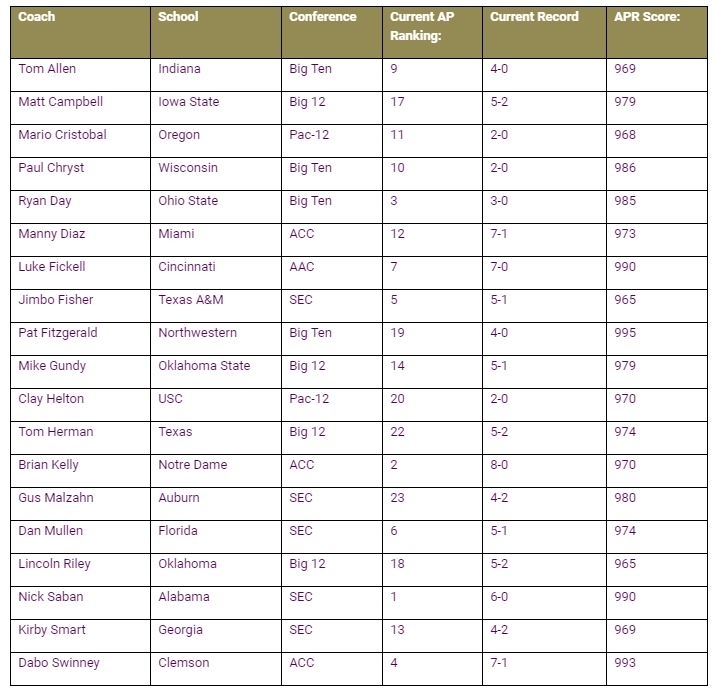 Of the 19 coaches on the midseason watch list, the SEC leads the way with five coaches selected, immediately followed by the Big Ten and Big 12 with four each, the ACC with three, the Pac-12 with two and the American with one. A total of nine coaches on the list remain undefeated going into the 12th week of the season.

The coaches on the list have collectively appeared in the College Football Playoff 17 times, and have won a total of nine national championships and 27 FBS conference championships. Off the football field and in the classroom, their teams earned an average Academic Progress Rate (APR) of 977 last year.

“The Dodd Trophy is unique from other coach of the year awards considering it looks beyond just wins and losses on the football field,” said Gary Stokan, Peach Bowl, Inc. CEO & president. “Each of these coaches have had successful seasons to date, but what sets them apart is how they’ve empowered their players in the classroom and impacted their communities in a positive way. All of these coaches on the watch list are strong contenders for this year’s Dodd Trophy and we look forward to seeing who emerges as finalists this last month of the season.”

A panel consisting of previous winners, national media, a member of the Dodd family and a College Football Hall of Fame member will identify the final list of potential recipients at the conclusion of the 2020 season. The winner of the 2020 Dodd Trophy will be announced in Atlanta during the week of the Chick-fil-A Peach Bowl.