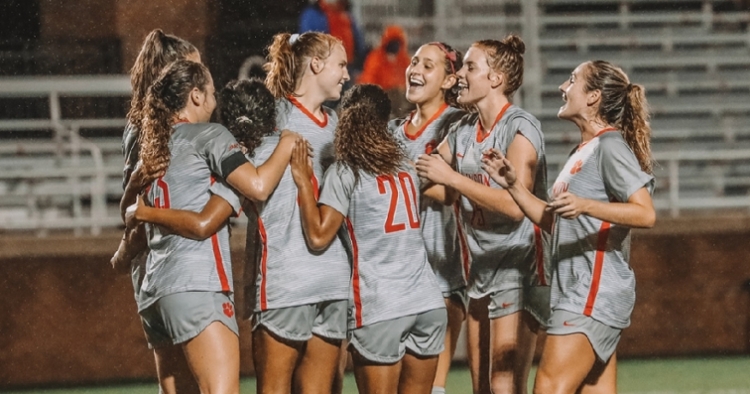 Clemson is 3-0 on the season (Photo credit: Clemson)

KANSAS CITY, Mo. - The Clemson women’s soccer team garnered their highest ranking since Oct. 7, 2000, as they were dubbed the No. 3 team in the nation based on the first poll released by United Soccer Coaches on Tuesday. The Tigers have never been slated in the No. 3 position despite being the No. 2 team in five weekly polls, all of which came in the 2000 season.

Currently operating under condensed rankings, The United Soccer Coaches selected the Top-15 teams in the first poll with only teams that have played a game being selected. Of these 15 teams, the Atlantic Coast Conference was represented by six schools, the most of any conference in the nation.

Through the first three games of the season, the Tigers remain unbeaten with a 3-0 record overall and a 2-0 mark within conference play. Clemson, Florida State, and Pitt are the only three teams that have not allowed a goal in ACC play this year. The Tigers and Seminoles are two of just 10 teams nationally that have not surrendered a goal this season.

Of the six remaining opponents on the Tigers’ regular-season schedule, four of the teams earned a ranking in the first release. Clemson will return to the field on Oct. 1 as they play a 4 p.m. match against the Tar Heels in Chapel Hill, N.C.

ACC In The Polls

Looking forward to what's ahead !! pic.twitter.com/lrh4mIWbaF