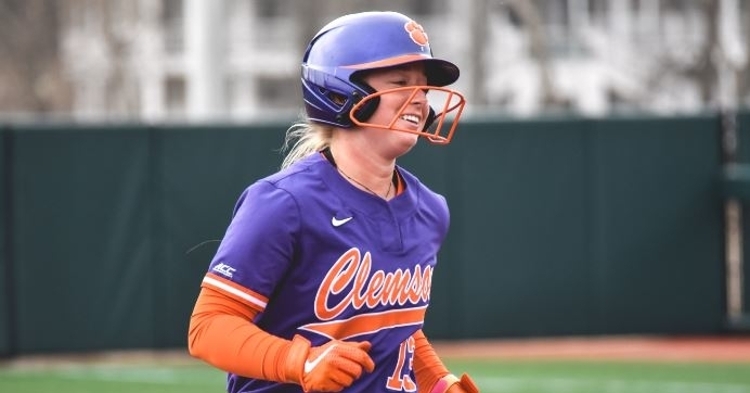 The Clemson softball team won its fourth and fifth games in a row on Saturday inside of McWhorter Stadium, sweeping the doubleheader between the Tigers and the Elon Phoenix (2-2). Clemson took game one by a score of 3-0 after another dominant performance in the circle by Valerie Cagle. The bats came alive in the second game, sweeping the doubleheader with a 10-0 win.

“Today was a big momentum builder for our team,” head coach John Rittman said after the game. “Getting back home after a tough ACC weekend series, playing against a very scrappy Elon team with two veteran pitchers.”

The redshirt freshman Cagle recorded her fifth complete game of the season in game one, tossing 7.0 innings of scoreless softball, striking out nine while only walking one Elon batter. Cagle moves to 5-1 on the season as Clemson’s ace. Clemson (8-2) got to Elon’s best pitcher, Kenna Quin, for three runs. Quinn came into the contest with a sub-one ERA and was 2-0 on the season before the loss.

Game two of the series saw true freshman pitcher Regan Spencer have her best outing in the circle of the season, tossing 5.0 innings and only allowed one hit.

Stuart hit her second home run of the day, and season in the second game. Clemson scored seven runs in the bottom of the fifth, capped off with Guimbarda’s fourth home run of the season, a three-run long ball to hit the run rule, 10-0.

With the 10-0 win, Clemson moves to 23-0 under John Rittman when the Tigers score more than five runs.

“Our offense is obviously a weapon for us, and I’ve said all along that was going to be a strength for us. We just have the ability to beat you in so many different ways and as long as we’re focused and locked in and competing at the plate, we’re going to score some runs.”

The two teams will conclude the series tomorrow, with game three starting at noon inside of McWhorter Stadium.

Clemson threatened to get on the board in the first inning, drawing back-to-back walks from Clark and Ansley Gilstrap to start the game. Three-straight ground outs would thwart the threat and end the inning.

The redshirt freshman Stuart got the scoring started for the Tigers in the next inning, launching a two-run home run over the right field fence, her first long ball of the season. The Tigers would pick up another run after back-to-back singles from Casey Bigham and Hyatt put runners on the corners. The true freshman outfielder Clark drove in her sixth run of the season the next batter, flying out to right field and scoring Carlee Shannon from third who was pinch running. Clemson would take a 3-0 lead into the third inning.

The Phoenix threatened in the top of the fourth, loading the bases with one out. Cagle used a strikeout and ground out to get out of the jam and keep the lead at 3-0 for the Tigers.

Clemson almost put up another run in the fifth, but a great throw from the Elon outfielder caught Jade Cheek, the pinch runner, out at home. The Tigers still held on to a 3-0 lead heading into the sixth.

Cagle forced the Phoenix into a 1-2-3 seventh inning and the Tigers took game one.

Elon loaded the bases in the top of the first inning in the second game of the doubleheader, but freshman Regan Spencer forced a ground out into a double play to escape the inning unharmed.

Clemson got on the board first in the bottom half of the first inning. After Clark was hit by a pitch to begin the inning, she stole second and was moved over to third by a Cagle single. Marissa Guimbarda drove in her team-best 11th RBI of the season the next batter with an RBI ground out and Clemson took a 1-0 lead.

Stuart added to the Clemson lead the next inning, sending her second ball of the day over the center field fence and doubled the Tigers lead, 2-0.

Clemson added another run on two hits and an Elon error in the home half of the third. Cagle led the inning off with a double to left field and eventually rounded third and scored on an error by the Phoenix third baseman. Clemson extended its lead to 3-0 heading to the fourth.

The Tigers scored seven runs on four hits and three errors in the fifth to defeat the Phoenix in five innings, 10-0. Stuart, JoJo Hyatt, Clark and Guimbarda all recorded RBI’s in the big inning.

?? Marissa must have somewhere to be...

Clemson vs Elon Box Scores
Comment on this story