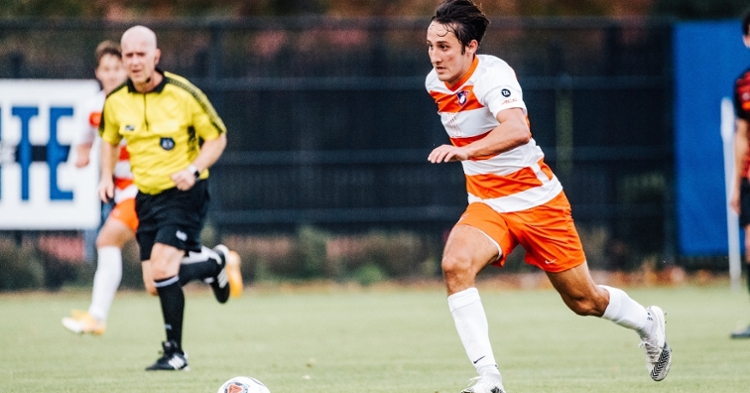 CHAPEL HILL, N.C. -- Kimarni Smith and Luis Felipe Fernandez-Salvador each contributed one goal on Wednesday night to secure a 2-1 victory over Virginia (3-4-1) for second-ranked Clemson (7-2-1). Clemson has now advanced to its ninth ACC Championship match in program history.

Tonight's result gives Clemson its 25th victory in the series, making the Cavaliers the eighth opponent that the Tigers have defeated 25 or more times. Clemson is now 22-26-10 overall in ACC Tournament play, and 7-7-3 in ACC Semifinal matches.

The Tigers got on the board in the 23rd minute after a masterful bit of skill from Smith in front of the net, as the senior chipped Virginia's outstretched goalkeeper from eight yards out. The opportunity was created thanks to a tenacious run from Grayson Barber through the Cavaliers' defense, with the junior poking the ball through the legs of a defender right to the feet of an on-rushing Smith.

Smith's goal is his fourth of the 2020 ACC tournament, making him just the fifth player in ACC history to record four goals in a tournament. Barber's assist is his third of this year's tournament, with the junior now one assist shy of the ACC tournament record.

The second half saw a strong start from head coach Mike Noonan's side, as Clemson's forwards were consistent in applying pressure to Virginia's defenders whenever they were on the ball, resulting in a pair of quick opportunities for the Tigers in their attacking third.

The Cavaliers would draw level in the 85th minute on a goal from Axel Gunnarsson. Gunnarsson scored the first goal for Virginia when the two sides last met in the 2019 ACC Championship match.

In the 87th minute, Smith's brilliance was on full display as the forward relied on his pace to sprint around a Virginia defender inside the Cavaliers' 18-yard box. The defender fouled Smith from behind, and the referee awarded a penalty kick as a result. The opportunity was precisely taken by Fernandez-Salvador, as the junior slid it inside the right post as Virginia's goalkeeper watched from the center of the net.

A key member to the Tigers' defensive effort this evening was freshman Ben Erkens, as the Greenville, S.C., native made the first start of his career tonight at center back. Joining Erkens in achieving a milestone during tonight's match was George Marks, as the Tigers' captain made his 35th career start in net.

With tonight's victory, Noonan is now tied with Virginia's George Gelnovatch for the eleventh-most victories amongst active D-I coaches. Both coaches now have 341 wins during their respective careers.

Clemson will now await the winner of tonight's second semifinal between top-ranked Pittsburgh and Notre Dame. This will be the first time that Clemson plays either side in the ACC Final. The championship match will be played at WakeMed Soccer Park in Cary, N.C., on Sunday, Nov. 18. The match will kickoff at noon and will be broadcast live on ESPNU.