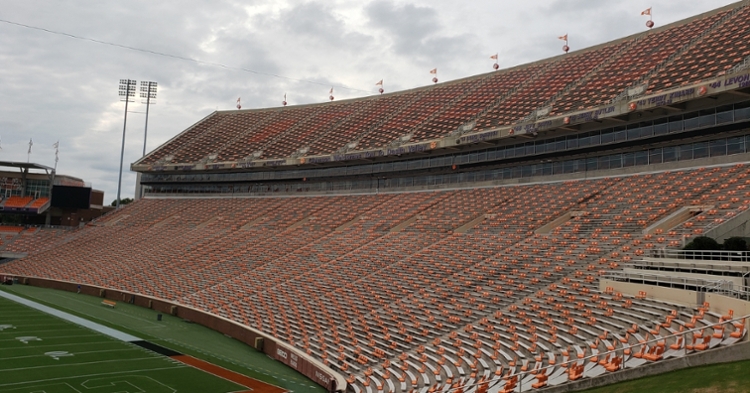 Clemson says the seatback placement was approved by the state, ACC and Clemson.

For each home game, Clemson Athletics seeks feedback from fans on their experience within Memorial Stadium. Here are some of the most-sent comments, as well as response to some of the most common topics. Upon receipt of the feedback emails, they are split into categories: Atmosphere, Concessions, Gates, Parking, Stadium, Traffic and Other. Clemson Athletics received a total of 191 emails following the first game.

Of those, here were five of the most common bits of feedback:

Lots open three hours prior to kick. While this is a change from years past, Clemson will continue to monitor the latest recommendations about how best to operate lots. Clemson is asking fans not to tailgate, and largely this was handled well in the lots. Large gatherings should be avoided, and tents and trailers are prohibited.

Clemson Athletics and its stadium food provider, Aramark, have made the decision to use pre-packaged items only until further notice. Clemson and Aramark will continue to engage about ways to safely diversify concessions offerings.

In extensive operations planning and communication, and in line with the City of Clemson and Clemson University’s face covering mandate, CUAD instituted a stadium rule requiring fans to wear face coverings at all times in the stadium, unless individuals are eating or drinking. This rule remains in effect, and fans are urged to continue wearing face coverings, even when at their socially-distant seats. This is out of an abundance of caution and consideration to those seated. Stadium safety is everyone’s responsibility. Clemson will have additional reminders throughout, and will continue to ask fans to abide by all stadium rules, including masks and distancing.

We have two types of crowd noise that is played in Memorial Stadium. The first one is the constant crowd noise that in continually played through the speakers during plays, which is regulated through the conference office. A pre-game meeting between coaches (or their designee), game officials, and operations staff is held to determine the decibel level of the constant crowd noise. For the Citadel game, that level was set around 74 decibels and is played at that constant level for both teams. Additionally, having a base level of crowd noise is an important factor both from a team and television perspective.

The second type of crowd noise is the reaction crowd noise, which is played after big plays (touchdowns, turnovers, etc). This is still a work in progress for us as we supplement the actual crowd noise of the fans who are in the stadium. This level is not regulated by the conference office as long as it’s not played while the ball is in play, which is consistent with guidance for how any sound is played during an ACC football game.

5. ATMOSPHERE: GOOD PLANNING AND COMMUNICATION IN THE LEAD UP TO THE GAME (62 MENTIONS)

CU: We sincerely appreciate the attention of our fans and donors to the new policies and procedures. They aren’t always easy, but they are part of what it takes for this season. We’ll continue to provide regular messaging, signage and communication related to the gameday experience moving ahead.

Finally, we were made aware of a tweet about the appearance that individuals were seated in a way that didn’t allow social distancing to occur. Clemson Athletics worked diligently to place seats in pods with at least six feet of distancing on all sides.