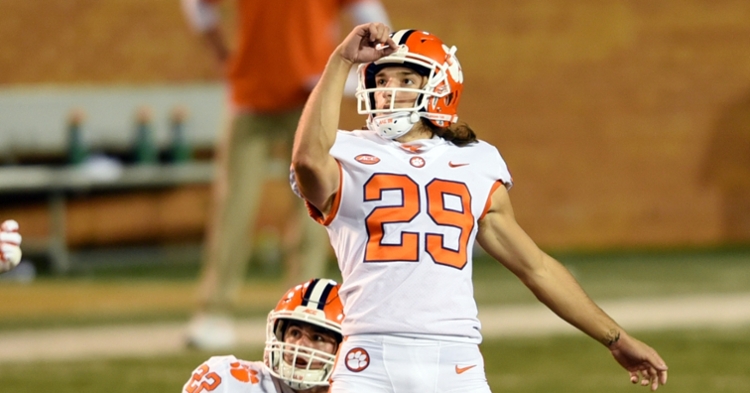 Clemson has a rare spot in the top-25 of a special teams metric this week (Photo per ACC).

ESPN's SP+ college football rankings were updated on Sunday to account for who's playing now -- and for some -- how they have played so far. Clemson is now No. 2 after a preseason No. 3 ranking.

Alabama, which begins action on Sept. 26, holds the top spot and Clemson, Oklahoma (4), Texas (6) and Notre Dame (10) are the only teams in the top-10 to play so far in this weird season.

New and temporary ACC member Notre Dame fell four spots after some struggles with Duke on Saturday. The SP+ formula currently favors Clemson by eight points over the Fighting Irish on a neutral field. North Carolina is right behind Notre Dame in 11th and would be a 10-point dog on a neutral field to Clemson per SP+.

Miami (12) and Pittsburgh (15) are also in the top-15 from the league and are future Clemson opponents this season.

The Tigers have the No. 4 offense and the No. 7 defense, as well as a top-25 special teams unit (22), according to the SP+ mix of preseason and in-season figures.