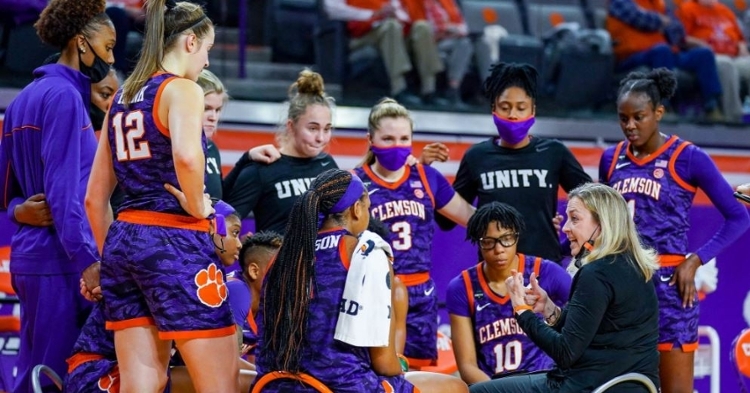 CLEMSON, S.C. — Clemson was unable to pick up a win versus Pittsburgh on Tuesday, as the Panthers defeated the Tigers 79-69 at Littlejohn Coliseum. The Tigers were coming off a double-overtime outing the previous Thursday and an overtime affair on Sunday.

The Tigers (9-6, 4-6) made 44.8 percent of their field goals, while the Panthers (4-4, 2-3) registered a field goal percentage of 41.4. Clemson knocked down seven shots from behind the arc and outrebounded Pitt 44-38. In the paint, Clemson accumulated 26 points. The Tigers also tallied 15 second-chance points. The Panthers, who made six 3-pointers, benefited from their 40 points in the paint and 39 points off the bench.

Delicia Washington scored a game-high 17 points and dished out a game-high seven assists, as well. She went 6-for-11 from the floor and 4-for-6 at the free throw line. Gabby Elliott shot 7-of-16 from the field and amassed 16 points and four rebounds. Amari Robinson corralled a game-high 12 boards to go along with her six points. Kendall Spray connected on a trio of 3-point attempts to give her nine points on the night. She also grabbed four rebounds. For Pitt, Liatu King and Destiny Strother scored 15 points apiece.

In the first quarter, Washington commandeered the Tigers with nine points on 4-of-5 shooting. She hit a trey to pull Clemson within three at the 3:18 mark, and, soon afterward, Elliott drained a three-ball from the corner to even the score at 14-14. That 8-0 run was capped off by Nique Cherry scoring a go-ahead layup in the fast break. Pitt went on to lead 19-17 at the end of the first quarter. The Tigers went up by three midway through the second quarter, but the Panthers took a 38-33 advantage into the intermission.

Early in the second half, Elliott made a layup to cap off a possession featuring three offensive rebounds. Spray's second 3-pointer of the evening decreased Pitt's lead to four with 4:11 left in the third quarter, and Destiny Thomas netted a three-ball of her own a few minutes later. The Panthers' lead entering the fourth quarter stood at 58-51. Elliott started the final period off with another corner trey. However, Pittsburgh maintained its lead the rest of the way and won 79-69.

Clemson will next head to Winston-Salem, N.C., for a meeting with Wake Forest (7-6, 4-5) at Lawrence Joel Memorial Coliseum. The Sunday, Jan. 31, contest between the Tigers and the Demon Deacons is slated to tip off 1 p.m. and air on ACC Network Extra.

"You have to give Pitt credit. They took the first punch and controlled the whole game. We definitely did not play our best. We didn't play good defense. We gave up seven offensive rebounds before the first media timeout. That's not us being us. The ACC is just so good, and if you don't have everybody on the same page, you're going to make it hard to beat anybody in this league."

"She's played really hard. I'm really proud of Delicia's growth. We've got her doing a little bit of everything. She's pushing herself as a leader, and I know she'd exchange every one of her 17 points for a win."

Gabby from the corner!

Shania takes it herself!

Told y'all, Gabby from the corner! ??