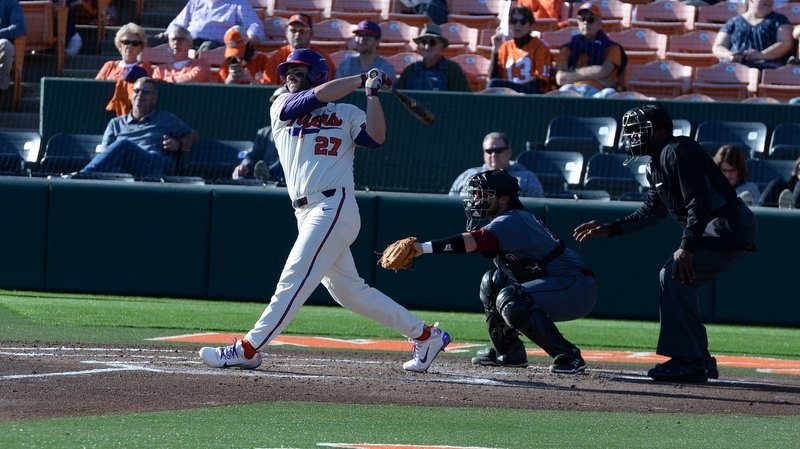 Williams hit his 12th home run of the season as Clemson clinched the series at Virginia Saturday.

CHARLOTTESVILLE, VA. - Logan Davidson, Chris Williams and Bryce Teodosio all hit home runs in No. 8 Clemson's 5-4 victory over Virginia at Disharoon Park on Saturday afternoon. The Tigers (33-11, 16-7 ACC) took a 2-0 lead in the series and secured their first series win at Virginia since 2002. Clemson also clinched a spot in the ACC Tournament.

Davidson hit the first pitch of the game over the fence for his eighth homer of the season, then Virginia (24-19, 9-14 ACC) manufactured a run in the bottom of the first inning. Davidson ripped a run-scoring single in the third inning, then Williams crushed a solo homer, his 12th of the year, in the fourth inning. In the fifth inning, Teodosio belted a two-run home run, his fourth long ball of the year, to give Clemson a 5-2 lead. The Cavaliers rallied for two runs in the sixth inning, but Clemson held them scoreless in the last three innings.

Tiger starter Brooks Crawford (5-2) pitched 5.0 effective innings to earn the win. He gave up five hits, four runs (two earned) and no walks with three strikeouts. Ryley Gilliam pitched the final 1.1 innings to record his ninth save of the year. Virginia starter Daniel Lynch (3-4) suffered the loss, as he surrendered eight hits, five runs and two walks with six strikeouts in 7.0 innings pitched.

Clemson took game one of the series in another one-run contest on Friday, 3-2. The win was a seventh-straight for the Tigers and a sixth-straight in ACC play.

The series concludes Sunday at 1 p.m., on ACC Network Extra.