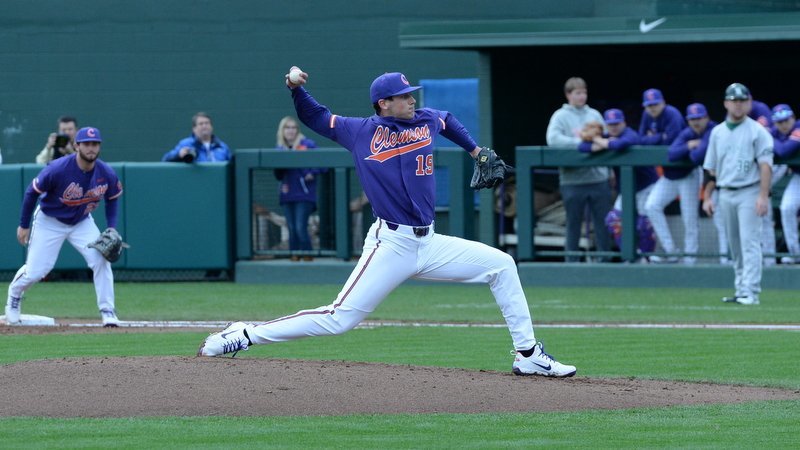 CLEMSON, S.C. - No. 8 Clemson scored four runs in the first inning and three runs in the sixth inning in its 9-4 victory over Boston College at Doug Kingsmore Stadium on Friday night. The Tigers, who took a 2-0 series lead, improved to 21-6 overall and 7-4 in the ACC. The Eagles dropped to 9-15 overall and 4-7 in ACC play.

In the first inning, Robert Jolly reached on a fielder's choice that scored a run, then Drew Wharton ripped a run-scoring single. Kyle Wilkie followed with a two-run single to cap Clemson's four-run frame. Scott Braren cut the Tiger lead in half in the fourth inning with a two-run homer. In the sixth inning, Seth Beer blasted a solo homer, his ninth of the year, then Clemson added two more two-out runs, highlighted by Wilkie's run-scoring single. The Tigers scored two insurance runs in the eighth inning.

Tiger starter Brooks Crawford (2-1) earned the win, as he gave up six hits, two runs and no walks with five strikeouts in 5.0 innings pitched. Ryan Miller pitched the final 4.0 innings to record his third save of the year. Eagle starter Dan Metzdorf (0-4) suffered the loss, as he yielded seven hits, four runs and four walks with nine strikeouts in 4.2 innings pitched.

The series concludes Saturday at 2 p.m., on ACC Network Extra. Kids can stand on the field with the team for the national anthem and run the bases postgame.

Beer blasts his ninth homer of the year & third this week! #Clemson

Patrick Cromwell with the #SCTop10 play in the fourth inning! #Clemson