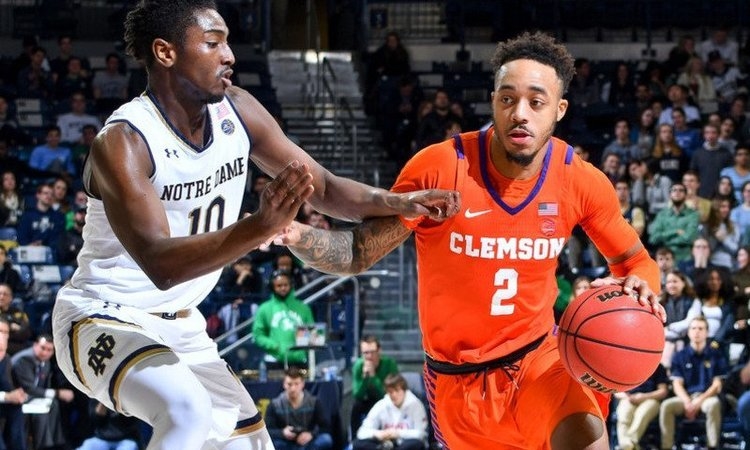 Few things have come easy for Clemson men's basketball this season but the Tigers turned a close game in their favor to a 64-62 win at Notre Dame Wednesday.

Clemson (18-12, 8-9 ACC) jumped out to six-point lead five minutes into the second half and maintained that edge almost seven minutes in. Notre Dame and Clemson then kept it to a two-possession - and mostly one-possession - game into the final stretch.

Marcquise Reed, who scored a game-high 22 points, keyed the Clemson effort down the stretch.

The Tigers jumped on top by one with under a minute to go with a Reed jumper. Reed then swooped in for a steal after Notre Dame called a timeout to gameplan and went to the free throw line, hitting both to extend the edge to three points.

Notre Dame (13-17, 3-14) answered with a drive to the hoop from Prentiss Hubb and then Clemson's Shelton Mitchell went to the line. He hit 1-of-2 but sent the Irish to the line with a foul on the baseline. There, Notre Dame's Nate Laszewski stepped to the charity stripe and returned the favor with a miss on his second attempt to effectively seal the game.

Clemson led by as much as nine points in the first half but the Fighting Irish closed the gap to even at the break, 32-32.

The Tigers improved to 2-5 in games decided by three points or less with the effort.

The win keeps Clemson in the NCAA Tournament hunt, projected on the last four in and first four out depending on where you look. The Tigers close the regular season slate at home versus Syracuse on Saturday (noon, CBS).

Clemson-ND box score
ONE DAY ONLY! Fanatics.com Black Friday Sale 20% off on orders over $75
Comment on this story