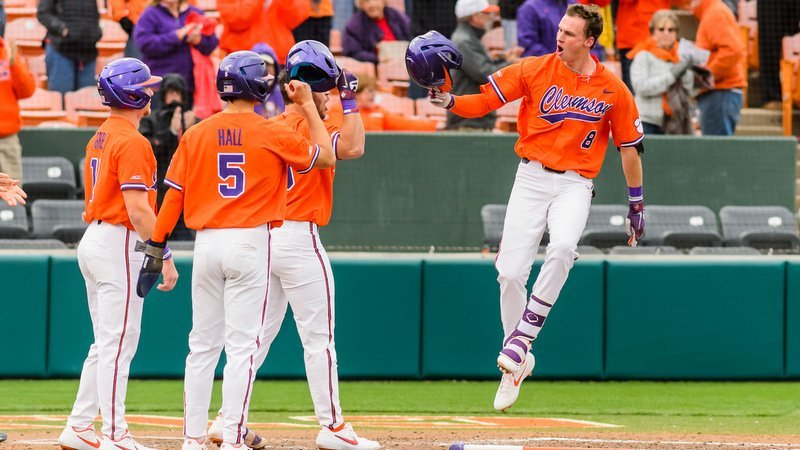 Logan Davidson knocked in two more runs in the 14-hit effort for the Tigers.

BRIGHTON, MASS. – No. 20 Clemson jumped out to a 5-0 lead behind six extra-base hits in the first three innings and held on for a 9-5 victory over Boston College at Harrington Athletics Village on Saturday afternoon. The Tigers, who took a 2-0 lead in the series, improved to 18-5 overall and 6-2 in the ACC. The Eagles fell to 11-11 overall and 2-6 in ACC play.

In the first inning, Sam Hall led off with a double and scored on Logan Davidson’s triple that extended his hitting streak to 11 games. Davidson then scored on Grayson Byrd’s sacrifice fly. The Tigers scored two more runs in the second inning on Bryce Teodosio’s inside-the-park homer, his sixth of the season. After Kyle Wilkie hit a run-scoring single in the third inning, the Eagles scored two runs in the fourth inning. Clemson responded with two runs in the top of the sixth inning without the ball leaving the infield before Boston College scored two runs in the bottom of the sixth inning on Lucas Stalman’s two-out double. Bo Majkowski, who had three hits and reached in all five plate appearances, added a two-run triple in the ninth inning.

Tiger starter Mat Clark (5-0) earned the win, as he allowed seven hits, four runs (three earned) and no walks with one strikeout in 5.2 innings pitched. Carson Spiers registered the last out to record his seventh save of the year. Eagle starter Matt Gill (2-3) suffered the loss, as he yielded eight hits and five runs in 2.1 innings pitched.

Clemson, who had 14 hits and eight extra-base hits in the game, won its 13th ACC road game in a row and upped its winning streak over Boston College to 12.

The series concludes Sunday at 1 p.m., on ACC Network Extra.