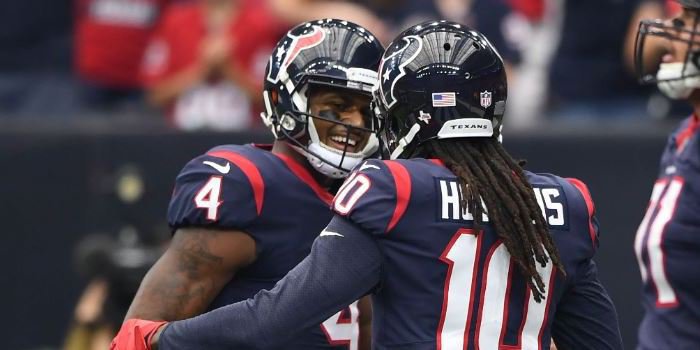 News and notes from week four for Clemson products in the NFL:

In case you missed it, Sunday was a big day in the NFL for Clemson pros. Summing up the standout performances:

* Deshaun Watson and DeAndre Hopkins teamed up to score the most points in Houston Texans history in a 57-14 win over the visiting Tennessee Titans. In only his third start, Watson tied a rookie record with five total scores (four passing, one rushing) and became the first NFL rookie to throw for four scores and run for one since Fran Tarkenton in 1961. Hopkins broke the century mark in receiving yards for the first time this season with 10 catches in 12 targets for 107 yards and a touchdown. On the defensive side, Marcus Gilchrist picked off a pass and added three solo tackles. He has a sack, an interception and six tackles over his last two games.

"Nobody's talked about Gilchrist. He had a helluva game yesterday."-O'Brien on S Marcus Gilchrist.

* Chandler Catanzaro continued his strong start with the New York Jets by breaking an overtime deadlock with a 41-yard field goal in a 23-20 win over the Jacksonville Jaguars. Catanzaro has hit 9-of-11 field goal attempts this season with seven coming from 40 or more yards out.

* On Catanzaro's old team, Andre Ellington and Jaron Brown had quite a day as well in an 18-15 win over San Francisco. Ellington did his most damage in the receiving game with nine catches for 86 yards, adding five rushes for 18 yards. Brown notched a team-leading eight catches for 105 yards.

* Tampa Bay and Adam Humphries edged the New York Giants in the debut of rookie Wayne Gallman, 25-23. Humphries totaled six catches for a second-straight week, racking up 70 yards. Gallman breathed some life into an anemic Giants offense with a touchdown reception and 11 rushes for 42 yards. “When I went out there, it was kinda surreal but I just made sure I calmed down and made sure I knew what I was doing," Gallman told reporters.. “It’s what I dreamed about my whole life. Ever since I got here on the Giants, I’ve been waiting to play so bad. From the first game all the way to this game, and to get that action, I’m ready for what’s coming.’’

Clemson players had a combined 39 receptions for 441 yards and 2 touchdowns in week 4. Hopkins and Jaron Brown both had 100 yd days.

Quick hits: New York Giants LB B.J. Goodson made his return after a two-game absence (shin) with six tackles (five solo) in the loss at Tampa Bay...Martavis Bryant was targeted five times with three catches for 48 yards in a Steelers' 26-9 road rivalry win at Baltimore. Coty Sensabaugh posted two solo stops in the effort...Atlanta's Grady Jarrett posted two tackles for loss and four solo stops total in a loss to Buffalo. Bills DE Shaq Lawson was inactive due to an injury in practice last week (groin)...Miami's Cordrea Tankersley wasn't the only the rookie defender to get on the board statistically Sunday. Houston fourth-round pick Carlos Watkins got in his first career tackle in the 57-14 win over Tennessee. Teammate D.J. Reader also added a stop...A game after exiting a Thursday night contest due to concussion protocol, LA Ram Sammy Watkins was held to one catch for 17 yards in a 35-30 win over Dallas...49ers punter Bradley Pinion averaged 50.1 yards on seven punts in a loss to the Cardinals...Vikings DB Mackensie Alexander put up one tackle in a 14-7 loss to Detroit...Daniel product and Chiefs defensive tackle Jarvis Jenkins posted his first tackle of the season in a 29-20 win over Washington Monday. Redskins cornerback Bashaud Breeland totaled six solo stops.