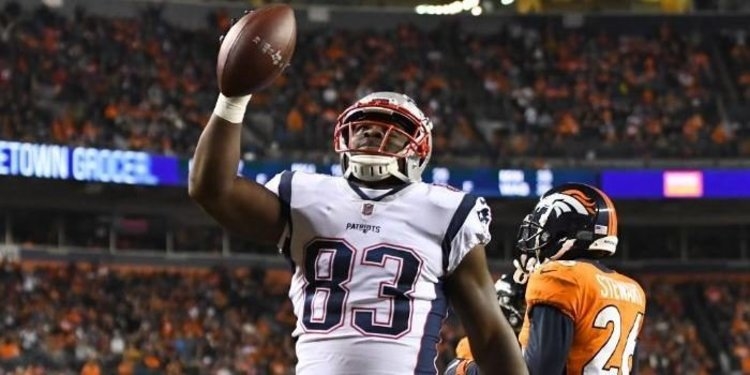 Allen has had to manage a new role with the Patriots after being traded from Indianapolis in March.

Dwayne Allen sees his first catch with the New England Patriots - which also happened to be an 11-yard touchdown - as an award.

Allen was traded to the Patriots in the offseason from the Indianapolis Colts, where he totaled 126 catches for 1,451 yards, but New England has used him mostly in a blocking role this season.

After eight targets in nine games, the sixth-year pro came open in the red zone to put New England up 27-9 at the half in Denver.

“It felt amazing," Allen told reporters afterward. "It felt amazing to get that monkey off my back and start heading into a positive direction. It’s all about consistency.”

"I hope it's a lesson for a lot of young guys out there. I came into this league wide-eyed and bushy-tailed and thought everything was going to be given to me. You come here to a winning football club and you learn that it takes self-sacrifice. You have to give up yourself for the benefit of the team. That’s what it’s all about. Sometimes, you’re awarded a touchdown.”

Quick hits: Texans receiver DeAndre Hopkins topped the triple-digit receiving mark for the second time in three games and a third time this season with seven catches for 111 yards in a 33-7 loss to the Rams. On the defensive side, Carlos Watkins totaled two tackles and D.J. Reader and Marcus Gilchrist each posted one stop...Opposite Hopkins Sunday, Sammy Watkins tallied his fourth touchdown as an L.A. Ram with two total catches in three targets for 41 yards...On his birthday, Mackensie Alexander posted his interception out of high school in helping the Vikings take a 38-30 win at Washington. He added three tackles as well. Teammate Jayron Kearse posted one stop in the effort. On the other side, Bashaud Breeland totaled three tackles...Steelers receiver Martavis Bryant is working back into the rotation with five targets and three catches for 42 yards in a 20-17 win over Indianapolis. On the defensive side, Coty Sensabaugh put up three tackles. For the Colts, T.J. Green added two stops...B.J. Goodson missed action with an ankle injury, while Wayne Gallman received three carries for 22 yards in a 31-21 loss to the 49ers. Among the league's more frequently-used punters usually, San Francisco's Bradley Pinion had a lone 45-yard punt, which pinned the Giants inside the 20...Mike Williams saw two catches for 24 yards in a 20-17 OT Chargers loss at Jacksonville...Jets kicker Chandler Catanzaro hit a 47-yard field goal in a 15-10 loss to Tampa. Bucs receiver Adam Humphries posted two catches for 17 yards in four targets...Arizona lost 22-16 on Thursday to Seattle with Andre Ellington taking two carries for four yards and three catches for 26 yards and Jaron Brown seeing six targets with two catches for 13 yards...Bills DE Shaq Lawson put up three solo stops, with one tackle for loss, in a 47-10 defeat to New Orleans.

Washington Redskins quarterback Kirk Cousins throws the ball over his intended receiver's head and is intercepted by Minnesota Vikings cornerback ???? @MackAlexander20 who celebrated his birthday on Sunday as well. Happy Birthday Mackensie ???????? pic.twitter.com/BNI2gov0eO

Another great @Vikings team win! Can’t deny it felt good to get my 1st @NFL INT on my birthday!! Thanks for all the bday wishes #5Straight #AllWorkIsEasy #SKOL