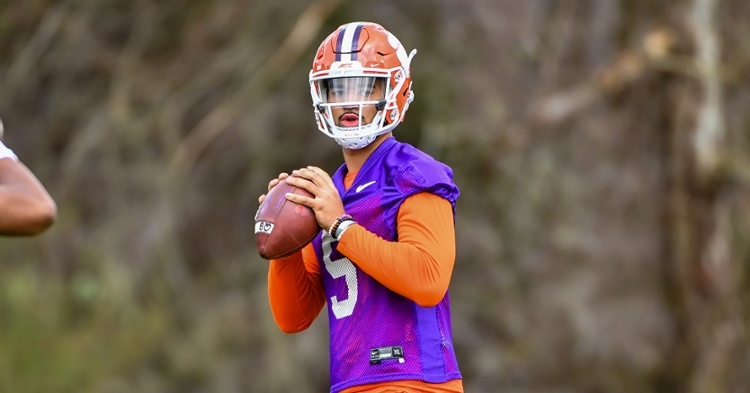 Uiagalelei could build on his earnings as he plays for the Tigers in new model.

The NCAA is expected to pass a measure next January that will allow athletes to benefit from third-party advertisements on social media and more areas.

For prominent QBs, that could mean a decent payday.

Axios talked to Opendorse CEO Blake Lawrence for expertise on what it could mean for a few players who could be around for the 2021 season.

The stark difference in potential earnings could come in name recognition, as they project a potential senior Texas QB in Sam Ehlinger making nearly a million dollars ($962K) and Clemson's DJ Uiagalelei, less than $100K ($81K) in the same timeframe.

Uiagalelei is projected to be a contender for a starting role in 2021 with Trevor Lawrence a likely No. 1 NFL draft pick next year. Uiagalelei already has a substantial social media following and could have a $3,005 value per post, per Opendorse's Lawrence.

Not factored in this equation is Clemson's long-honored team tradition to not post on social media during football season, which will surely become a hot topic again in 2021. In the early proposals of the NCAA plan, agents for specific services like social-media deals could be hired, which could possibly post items on social media for athletes in this situation.