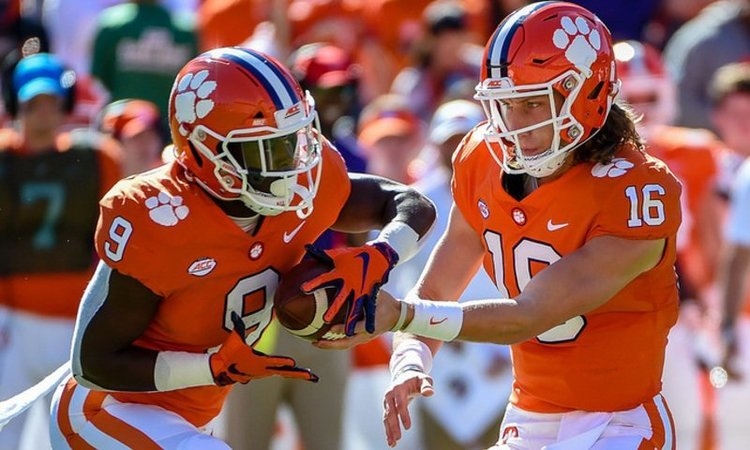 Clemson maintaining some balance on offense could keep the pace under the Tigers' control Monday.

Elite versus elite. Titan versus titan. Superpower versus superpower.

However you describe it, all the metrics point to what should be the most highly-anticipated game in college football championship history.

On one side, a Clemson defense focused on the finish - not revenge - is rated No. 1 by ESPN’s Football Power Index and Football Outsiders’ S&P+. Opposite them is an Alabama offense led by the nation’s highest-rated passer, sophomore Tua Tagovailoa, commanding the nation’s top offense in several other categories.

On the other side, the matchup is every bit as stacked with the always-vaunted Alabama defense and a rejuvenated Clemson attack under freshman Trevor Lawrence’s leadership.

The Vegas line for this matchup opened at seven points in Alabama’s favor and now Clemson stands as a 5.5-point underdog, a role the Tigers have thrived under in the postseason with Dabo Swinney and slightly under what they overcame for a title in the 2016 title win over Alabama (6.5).

A look at the keys to the game:

Few teams can create the kind of pressure on a quarterback that Clemson can - few quarterbacks have been able to handle pressure like Alabama’s Tagovailoa.

Clemson ranks third nationally in havoc rate (21.2; sacks, TFLs, passes defensed, forced fumbles by play) and second-best in blitz down sack rate (18.9), while Alabama is fourth-best against opposing havoc rate (11) and No. 1 in blitz down success (46.4) and big-play rate (19.6).

Tagovailoa holds a top-5 passer rating under pressure (4th; 104.4; per Pro Football Focus) - and when forced into third-and-long situations, he leads an Alabama offense ranked second in success rate (39.2).

Tagovailoa was a top challenger for the Heisman for a reason and Clemson’s front-seven has to maintain its success as a run defense (No. 1 in S&P+) - and then get Alabama off the field when pressing them into passing situations^, where the Crimson Tide rank No. 1 as well (Clemson ranks fourth there defensively).

Much of the talk surrounding a run-geared Clemson offense last season versus Alabama was the Crimson Tide putting numbers in the box and daring the Tigers to throw it. As it turned out, Alabama looked confident in sticking to its typical plan and controlled the line of scrimmage just fine - keeping the running game under 100 yards minus sacks (98) and containing Clemson under 100 yards on pass attempts with sacks factored in (90).

Showing himself quite capable as a first-year starter, Trevor Lawrence airing it out Monday would follow the pattern of close calls in the 2015 and 2016-season matchups, where Deshaun Watson averaged 52 pass attempts versus the Crimson Tide. Alabama, however, is coming off giving up 6.8 yards per play to another high-level offense in Oklahoma and the Sooners averaged 5.1 yards per carry with two of their touchdowns.

Clemson has gained at least triple-digits rushing in all but one game this season and averaged 6.6 yards per carry over the last four contests. Being able to maintain a consistent-enough ground game to control some possession and make Alabama respect their offensive balance can keep Pt. 4 in this postseason series from being a shootout versus a team that’s put up some serious numbers this season.

With how even things are on offense and defense, both fanbases likely cringe at the thought of special teams being a deciding factor in Levi’s Stadium.

Both teams rank in the bottom third of the Power 5 in value on field goals (Clemson 90th in FG value; Alabama 88th) and efficiency in punts (Clemson 99th; Alabama 120th).

By game’s end, either team may only be as strong as its weakness in this area and field position in particular could flip the result if it’s close late.

Alabama holds a clear advantage in the downfield passing game, with Tua Tagovailoa competing over 50% of his throws at 20+ yards downfield pic.twitter.com/vzdYewSM0b