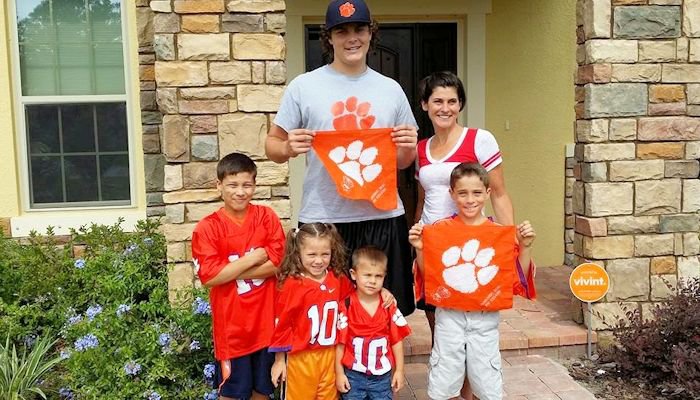 The love of all things Clemson brought two families close together recently, where a large and healthy football player made the day of a small Clemson fan battling for his life.

Jake Fruhmorgen, the 2015 offensive line commitment out of Tampa (FL) Plant, spent time with Greco Roman Bouzakis and his family in the Tampa area, putting a smile on the face of young Greco, a typical three-year old who loves Clemson and wants to wrestle when he grows up.

However, Greco is also battling a life-threatening disease. In August of last year, Greco was diagnosed with diffuse intrinsic pontine glioma, an inoperable and fatal brain stem cancer found in children. The initial diagnosis was a life expectancy of 11 months to a year, and the diagnosis occurred only a month after the family moved to the Tampa, FL area.

That original diagnosis was 10 months ago, but Greco is a fighter by nature, and an MRI taken this week reveals the tumor has shrunk.

Greco’s parents are Clemson graduates Troy and Toni Bouzakis, who attended Clemson in the early 90’s. Clemson wrestling fans may remember Troy, who came to Clemson after a stellar high school career in New York where he was known as "Buzzsaw Bouzakis" for his intense style. Bouzakis dominated high school wrestling for five years (1986-90), losing only twice in 181 career matches. Both of those losses were in overtime at the state championships.

A torn anterior cruciate ligament in his left knee and a herniated disc in his neck limited Bouzakis to one season and 27 matches at Division I Clemson, where he ended his career with a 26-1 record. Title IX eventually forced Clemson to drop the wrestling program, but Troy graduated with a bachelor's degree in industrial technology. It was at Clemson that he met Toni, and the two set out to begin their careers and raising a family. 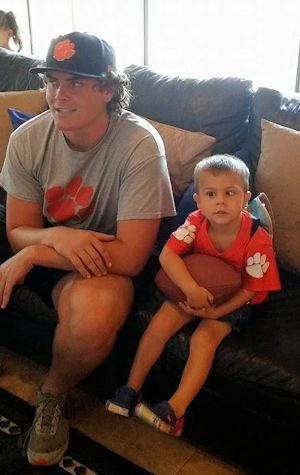 The dynamic pair often returns to Clemson for wrestling reunions, and they’ve dedicated part of their lives to fostering a love of wrestling in young people. It is that same fighter’s spirit that has enabled Greco to fight a disease he really doesn’t understand.

A mutual friend of the Bouzakis family and of John Furhmorgen – Jake’s dad – set up a meeting between the young Clemson fan and a player who could be a pillar on the Clemson offensive line for years to come.

“One of Jake’s coaches said, ‘Look, I know this family and they are all Clemson fans, would you come out and spend a couple of hours with them?’ We said yes, and Jake said, ‘Yes, whatever you need coach.’ So we go out there and come to find out his wife is from South Carolina and even today they are still wrestling fans,” John Fruhmorgen told TigerNet this week. “The family was in Miami last August, and Greco woke up and his eyes were crossed. They took him to the hospital, and it turns out he has a tumor they can’t operate on.”

John played on the offensive line at Alabama, and later on in the NFL, and Toni Bouzakis wondered what the sight of two very large men walking through her front door would do to Greco.

“Greco can be moody, and there are times when he doesn’t want to deal with strangers,” Toni said. “I honestly was a little worried about how he would react, and then when they came in I was shocked at how big they were. I don’t think my kids have ever been around anybody that big before, and I wondered how Greco would react. But he took to Jake right away, Jake was wonderful with him.”

Frugmorgen said the Bouzakis family even gave them a gift and filled them in on a Clemson tradition.

“We had a chance to meet them and spend two or three hours out there. I guess Clemson fans are known for taking photos with a Clemson flag wherever they go,” Fruhmorgen said. “And so they gave us a flag and took pictures with Jake. They go up once a year to a football game, usually when the wrestling team is honored. But the whole family – even the little girl – is into wrestling and they were showing us their medals and trophies and it was really cool. And when we got there, they all had their Clemson jerseys on. “

Fruhmorgen said it was an experience he knows that Jake will never forget.

“It was just such an honor to be around them, and we were able to sit down and eat some bagels with them and swap stories,” he said. “One of Jake’s defensive coordinators is their neighbor, and he asked us to do that. I also reached out to a friend of mine with the Buffalo Bills – Doug Marrone – and he is going to get Sammy Watkins

Sammy Watkins
Wide Receiver (2011 - 2013)
#2 6-1, 205
Fort Myers, FL
View Full Profile to sign some things and send them down. And even though Jake is very young he was open to it, and he was great. They were such nice people. We have actually invited them out to a football game this fall.” 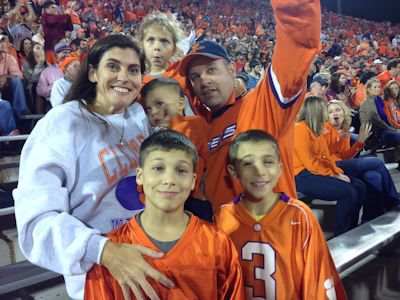 Toni Bouzakis said that even though the doctors stick by their original prognosis of 12 months, an MRI taken earlier this week shows the tumor has shrunk in size and Greco continues to wrestle and live a fairly normal life.

“I know what the doctors are saying, but Greco really isn’t ever even sick,” she said. “The only way that you can tell that something is even wrong with him is because one of his eyes is crossed. Otherwise, he is fairly normal. So we are going to keep praying and believing.”

The family has set up a website to support their efforts on behalf of their son – www.livegreco.com – and I asked her what the Clemson family could do to help support her family. She said that all she asks for is prayers.

“That’s all we really need,” she said. “We just ask that people continue to pray for him and for our family.”

For one special afternoon, however, the true definition of what people mean when they say “Clemson is a family” was acted out in a living room in Florida, and two families are richer for the experience.