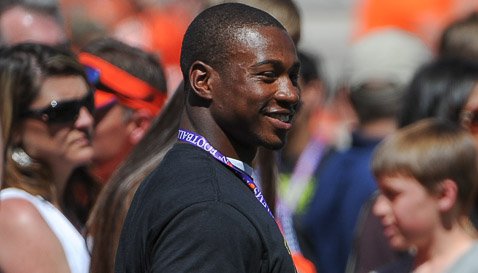 Choice is the all-time leading rusher at Thomas County

Most of Clemson’s 2014 recruiting class has been on board for quite a while, but it wasn’t until last weekend’s round of official visits that they really had a chance to get to know one another.

View Full Profile from Thomasville (GS) Thomas County Central spent the weekend with 11 of his fellow commits in Clemson over the weekend, and he told TigerNet that it was nice to have a relaxed atmosphere to get know current and future Tigers.

“Wayne Gallman was my player host for the weekend,” Choice told TigerNet Sunday evening. “It was a lot of fun to get to know him and some of the other players. I also got to spend a lot of time with the other recruits and talk to them and get to know them. I’ve seen a lot of them at games for a long time, but we never got a chance to talk, so this was a chance to just get to know each other.”

Gallman – a redshirt freshman and fellow Georgia native – had some friendly advice for the 4-star recruit.

“The coaches just want me to come in and compete and that’s my mindset,” Choice said. “I got to sit down with Coach Morris for a while and he went over things that the offense does. He told us how we need to work when we get there and the things that we need to do.”

Working hard won’t be a problem for 5-9, 190-pound back who tries to get the most out of every practice and every snap.

“I can’t really put my finger on it,” Choice said. “I just know that I pride myself on making the most out of every carry. I work hard to get first downs and score. I will do whatever I have to do help my team.”

Choice will enroll at Clemson for the second summer session, and he said that a nagging a shoulder injury should be completely healed by the time late June rolls around.

“My shoulder is getting better everyday,” Choice said. “It’s not quite 100% yet, but it should be ready [by fall camp].”

As Thomas County’s quarterback, Choice rushed for 1,595 yards and 12 touchdowns as a senior, and holds the school rushing record with 5,091 yards.