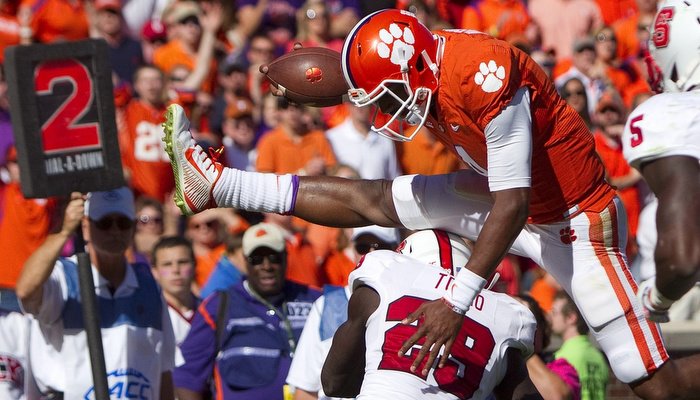 I have forgotten where I heard it first, but whoever said, "They always remember November" was right.

College football fans can get excited about early season success, but most championships are won or lost in November. The weather turns cold. The wins tend to be a bigger factor. Injuries mount. Somewhere in the midst of challenges, championship teams find a way to win.

In my formative years of watching Clemson football, I watched the Tigers win ACC championships. It might have been a defensive struggle in Chapel Hill or a windy day in College Park, but November was always kind to Clemson during that time period.

Dabo Swinney
Head Coach
View Full Profile is currently 16-8, but is favored to be 20-8 after this November.

Unfortunately, Clemson won't win the Atlantic Division this year due to a September loss to top-ranked Florida State in overtime in Tallahassee, but we can still be excited during this uncharacteristically chilly November for a couple of reasons.

First, the Tigers can drive another stake in the heart of the old, tired "Clemsoning" title. There were times where the Tigers didn't play well on Thursday nights. There were times where they didn't play well in places like Winston-Salem. It was called a House of Horrors. However, those times are behind this program and I fully expect a win this Thursday.

A week from Saturday the Tigers can take care of another demon. Clemson has not won at Georgia Tech since 2003. The Tigers have suffered four straight losses on Grant Field. Atlanta has been an unkind city to the Tigers in the past, but with a win against Tennessee in the 2003 Peach Bowl and a victory in the 2012 Chick-Fil-A Bowl against LSU, the Atlanta jinx has been broken. If Deshaun Watson

After a tune-up against Georgia State, the Tigers will get a chance to break its most critical losing streak, a five game losing streak to the arch rival. Considering the game is in Death Valley and considering several other factors, I think this one looks good for the Tigers as well. South Carolina is ranked 103rd in the country in scoring defense, 104th in total defense and 111th in rushing defense. Again this one may come down to the health of Watson, but signs point towards a Tiger victory.

The Tigers can play their way into the top ten in the country with four November wins. They may be able to play their way into another Orange Bowl appearance as well. I think with a 10-2 regular season, an Orange Bowl bid, and the promise of Watson leading a powerful offense,Clemson could be a pre-season top 10 pick again next year.

A lot can change between now the end of the month, but like almost every year there is so much riding on the last four regular season games. The calendar has turned and there is a chance to make this a November to remember.

Cole Stoudt
Sr. Quarterback
#18 6-4, 231
Dublin, OH
View Full Profile , Israel, Frankie Allen, Bobby Allen, the Horton family, the Wessinger family, the Parsons family, and our great country and the men and women in uniform that protect and serve it every day, plus their families.