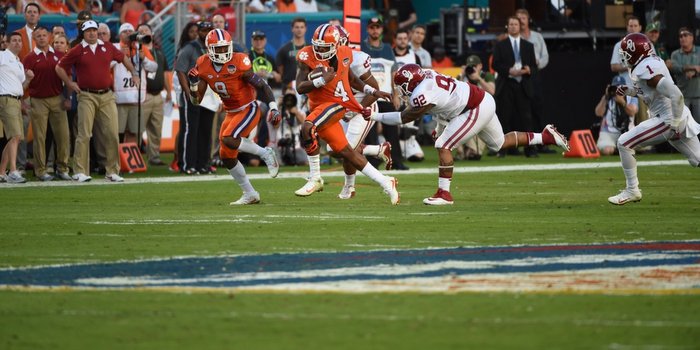 The Window of Opportunity

I am glad to be back after a few weeks off. Life got a little hectic. I got married, and we had to move out of our house for a couple of months while we do a major renovation. But Meredith and I enjoyed a nice vacation; my batteries are recharged, and I am ready to get this football season started.

You hate to wish your life away, but I am looking forward to heading down to the Plains to see the Tigers beat up on the War Eagles or Plainsmen or whatever they are called.

In one way I hate to see this off-season end. Clemson has enjoyed a ton of great publicity. You can't pay for this program has gotten this off-season. You can't go to a magazine rack and not see Deshaun Watson or Wayne Gallman. Pre-season polls have the Tigers ranked in the top five. Watson is the nation's leading Heisman candidate. Recruiting has been on fire.

All of this off-season publicity takes a hit if and when the Tigers fall. This is what Ohio State was going through this time last year. Everyone loved the Buckeyes from January until August, but it was obvious the pre-season pub lead to complacency. Ohio State couldn't handle success. Can Clemson?

No football coach knows what he has until his team takes the field. It is my hope this team is mature enough to handle the success. Hopefully, they have been focused on the process every day and are not getting caught up in the noise of the off-season.

Some believe this is Clemson's year. Some say the Tigers have to get it done before the Deshaun Watson window closes. I completely disagree. Clemson has built a solid foundation. It is one that should lead to continued success.

At Alabama when Mark Ingram leaves, Trent Richardson is there to take over. That foundation leads to Derrick Henry to whoever is next in line.

Clemson has built that kind of program. Vic Beasley hands the torch to Shaq Lawson, who hands it to Austin Bryant.

This program is here to stay. At least they are here for the foreseeable future.

If Clemson were a one-hit wonder, I would want this off-season to drag on and enjoy the fruits that come with publicity. Instead, this kind of expectation will be around each off-season for the next few seasons. Therefore, I do wish September would hurry and get here. My batteries are recharged. Let's roll!