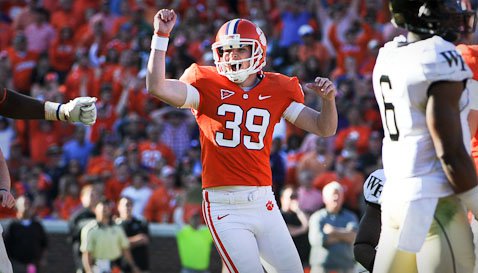 When you watch Clemson this season its easy to see the Heisman trophy candidate at quarterback and the All-American candidate at wide receiver but the little things are also helping this undefeated start.

Clemson does the little things well. For example:

*The Tigers have won the turnover battle in all five games so far this season.

*Clemson has held opponents to 24% on third down conversions.

*The Tigers already have 19 sacks and fifty tackles for a loss in five games.

*Twenty-one Tigers have a tackle for loss this season and 11 have recorded a sack.

*Nineteen different players have caught a pass this season.

*The Tigers kicking and punting have been exceptional. Tiger kickers are 4-4 on field goals and 29-29 on extra points.

*On 19 possessions in the red zone this season Clemson has scored 16 touchdowns. The opponents have had the ball in the red zone 11 times and have scored on only seven of those trips.

*Clemson has had four different players lead the team in rushing in the five games this season.

*The Tigers have held the last four opponents to 14 or less points.

*Clemson has held the last four opponents under 400 yards.

*The Tigers have had a better average starting position than all five teams they have faced this season.

*The Tigers have had 18 defensive players play at least 100 snaps each this season.

*Clemson has allowed only six punts to be returned this season.

*Clemson has at least three touchdown passes in every game this season. The opponents have had a total of three.

These are just a few numbers that I spotted over the last day or two. Some are obviously more significant than others but I thought it each was an interesting view of what has transpired for the team this season.