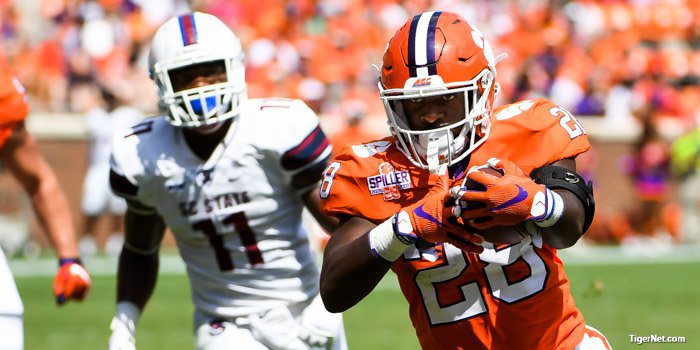 I know many people in the stands Saturday may have been more concerned about the Louisville-Florida State score and some may have been looking ahead to Clemson's next trip to Atlanta. However, there was a football game going on in our stadium, and this one couldn't have gone any better.

Clemson didn't dominate for 60 minutes Saturday. Instead, the Tigers had to settle for 52 minutes since the powers that be cut the quarters to 12 minutes in the second half. I have seen high schools use a running clock but have not seen this mercy rule show up in the college game.

I do warn that we cannot take a lot out of the results due to the inferior talent level of the opponent, but it was nice to see new faces.

Feaster was the Tigers' leading rusher with 83 yards on 12 carries.

Overton caught a beautiful 45-yard touchdown pass. Cornell Powell caught a couple of balls and was one of four players used as a punt returner.

On the offensive line, we got our longest looks so far from the three true freshmen Sean Pollard, John Simpson and Tremayne Anchrum

The defense got the shutout, and we got long looks at Chad Smith, Tanner Muse, Trayvon Mullen, Jamie Skalski and Denzel Johnson.

Ray Ray McCloud was a highlight. His punt returns were again a huge improvement from the past few seasons. How nice is it that Clemson now has a legitimate threat as a punt returner?

The kickoffs and kickoff coverages were a highlight. Greg Huegel had six chances for touchbacks, and he came through five times including a touchdown from a botched touchback.

I would like to say the punt team improved, but the Tigers only punted once.

So now the pre-conference season is over, and the Tigers emerged 3-0 and fairly healthy. This is a short turnaround week with a difficult offensive scheme to prepare for in Georgia Tech. If the Tigers win in Atlanta Thursday night, and Louisville wins at Marshall, we are set up for the latest version of the game of the year the following week. But that is if and only if both teams don't look ahead this weekend.

As David Hood wrote, the pre-season is over. Unleash Watson in the running game. Turn Jordan Leggett lose in the passing game. Get the Wayne Train lathered up. Now the fun begins.