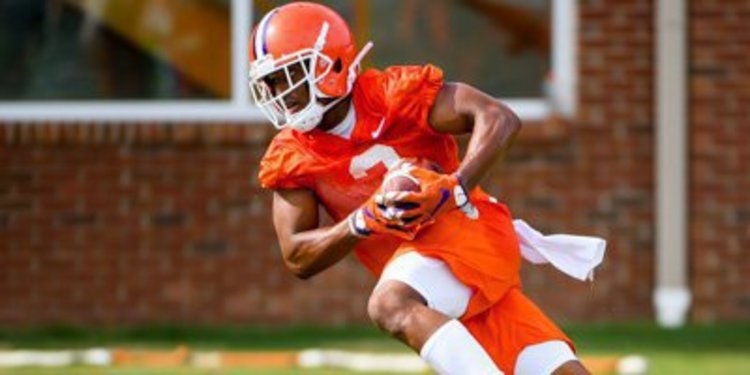 Any word on Amari Rodgers and his return date? Thank you. I enjoy your show and glad you are answering emails on Tigernet again.

The only official word we have so far is that Amari is out the week against Georgia Tech. There is some talk about him playing next week against A&M. I saw Amari run at practice in fall camp, but he was only running straight lines. His real test will come with cutting. I am told he has been amazing in his rehab and works his butt off. He will be a big of the offense and return game when he does return, but I am always a little skeptical when it comes to Dabo and what he says about injuries. Dabo is optimistic in his timetable for return dates, so I have learned to add some time on the back end of what he says in many cases. I think we will get a better idea sometime next week.

I was at the radio station’s kick off event this year where y’all announced stations in Spartanburg, but I haven’t heard anything since. What is the latest? Thanks.

I don’t have an exact date for you at this point. I do know that the technical people have worked overtime to get this going and the legal requirements are going well. There is a good chance they could be up in the next few weeks. Until then the website www.wccpfm.com and the app are always up and running and all of the shows are podcasted there. Thanks for asking. Hope to hear good news soon.

I am concerned about the tight ends this year. My buddies say we can get away with four wideouts a majority of the time, but I love seeing great tight ends at Clemson like Dwayne Allen and Jordan Leggett. Is this just a lost cause this season?

I think it makes a lot of sense to be concerned. This unit lacks talent and/or experience that the rest of the offense possesses. Chalk and Price have made good strides, but they have physical limitations. The best looking specimen is Lay, but he is raw and has a lot of developing to do. Allen is a solid prospect, but he was limited in camp with an ankle injury, and he has zero experience heading into the opener. You are correct when you state the importance of the tight end. It’s not as simple as just rolling four wideouts out there every play. The tight end position is a key to this offense, and those guys will have to develop quickly to fill this important role.

I think Clemson needs a Heisman Trophy winner but will Trevor and Ettiene hurt each other’s chances by splitting votes? Congrats on your son Drake. I know you are proud of him.

Thanks for the kind words about Drake. God truly blessed us with him. He is awesome!

I think if Trevor and Travis had huge years, I could see vote-splitting being an issue. It to have two Heisman candidates on the same team, but it has happened. It didn’t hurt Reggie Bush or Matt Leinhart in 2004 and 2005. In the end, I doubt it will be a huge factor, but you do raise a good question. My guess is that it will be clear to voters which Tiger is more deserving of the award by seasons end.