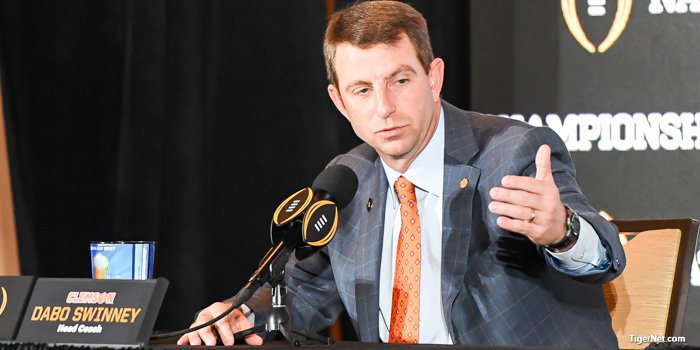 Still way to early to tell but in my opinion and at first glance, the 2018 recruiting class is the best class Dabo has signed. With the recruits already committed for 2019 and other potential target recruits still undecided as National Signing Day draws near, do you think the 2019 recruiting class is going to be better than 2018?

I haven't heard much about 2019 QB commit Taisun Phommachanh, what have you seen and heard and what are your impressions of him as a player/future Tiger?

Thanks and God Bless,

I really like this class so far and I think this class can be special. Part of the reason this class is ranked so high is the overall number of signees. This will be Dabo’s biggest class. Concerning quality, I think the 2018 class will be hard to beat. Lawrence, Dixon, Ross, Kendrick, Galloway, Carman, McFadden, Thomas, Henry, Mascoll, Jones, McMichael, Goodrich, and Potter might go down as the best class we have seen here. I do think the next class has a chance to be special as well.

I did not see him in camp settings and have only seen his video. He is a good looking athlete. He is not yet a polished passer, but he has a great set of tools. I would compare him to Kelly Bryant at this stage but he is a better passer entering college. I am interested to watch him this spring.

So will we ever see a Clemson player win the Heisman Trophy? Clearly, the voters look for eye-popping offensive numbers as has been evident the past few years. If huge numbers are a requirement, what does that do for the chances of a Clemson player?

Next year could be a most exciting year for Clemson as the offense should be awesome and the defense a huge unknown. With Trevor Lawrence and Travis Etienne on the field with the likes of Tee Higgins, Amari Rodgers, Justyn Ross, and the other WRU crew, the offense can and should score early and often. The points should come at a record pace if everyone stays healthy.,

In a strange way, the hopes of a Clemson Heisman may well depend on how well the defense does. Let's be honest, unless something changes, the teams in ACC are no real threat to Clemson and that does not bode well for a Clemson Heisman. Why, because Dabo will play everyone on the team and spread the wealth and that is exactly what he should do. Doing what is best for the team, in the long run, is the right thing and even by putting up huge scores this year, the votes for Heisman went other places. Winning games and championships are far more important than putting up crazy offensive numbers.

Etienne is only a second-year player, and Lawrence, of course, is a rookie, so certainly they will hopefully only get better next year and get more publicity. I would love to see a Clemson player in New York again for the Heisman ceremony and a winner would be great but could it take a lesser defense and more competition to keep Trevor and Travis on the field to put up bigger numbers? What say you?

The Heisman is hard to handicap now because it is actually won on the field now. No one saw winners like Winston or Jackson coming into their seasons. This year Bryce Love was the pre-season favorite. I do think Ettiene and Lawrence have a shot. I really like Lawrence’s chances more than any player I have seen at Clemson.

The offense next season could be as good as any we have seen at Clemson. You make an interesting point about the defense, but one factor more important in my mind is the idea of splitting votes. Maybe Ettiene and Lawrence take votes away from each other.

I do think the best part of the Heisman now is the award usually goes to the guy who wins in on the field instead. Trevor and Ettiene have a chance to prove they are worthy.

It has seemed inevitable that Alabama and Clemson would meet at some point again this season, and sometimes you get what you hope for. The winner of the Championship will be the first 15-0 team in history and has a chance to be called the GOAT. I am not a big believer in comparing teams from different seasons and especially different eras with different rules but if Roger Maris can survive the asterisk, certainly this year's champion can take great pride in being the first to reach 15 wins. Who knows if there will be another 15-0 team but being the first would be forever special.

I am a big believer in learning from the past and Clemson most certainly has a lot to learn from last year's game against the Tide. Despite the year, decade or century, football will always be a game that is decided at the line of scrimmage. Both Clemson and Alabama have exceptional, fast, strong and talented players on both sides of the ball but the game will hinge on who controls the line of scrimmage. I guess in this modern time, there are not many people who remember watching actual film because fewer and fewer even remember picking up a phone and dialing a number but somehow, the image of last's game with Alabama has to be erased.

Clemson coaches need to take a pile of old VCR tapes (surely we remember those) and have a ceremonial burning of last year's total domination by Alabama on the lines of scrimmage. I have no doubt that Clemson's players are just as good as Alabama's but are they as tough? Here's hoping our offensive and defensive linemen burn the tape, put on their big boy pants and become the Greatest Team of All Time. GO TIGERS!

Mickey - great job on the blog. Really enjoy your insight. I'm hoping you can help me answer something I have wonder about DW4 since he was at Clemson. If he were ever to lead his NFL team to a Super Bowl championship - would he be the first player to ever have a State Championship in High School, National Title in College, and Super Bowl trophy in the NFL?

I think he's got a shot!

To my knowledge, Joe Namath is the only quarterback to win a state title, national title, and Super Bowl. I had heard this before, and I can’t find anything that says otherwise. Hope this helps.

Clemson football certainly did well with the early signing day. I heard a number of callers into your show this week that were initially not happy with Robbie Caldwell and his recruiting. What a difference one commitment this year can make. It seems that criticism has really quieted down after the Putnam commit.

Coach Caldwell landed five star Jackson Carmen last cycle and a four-star this cycle and if I’m correct he has a number of top prospects for 2020.

When do you think he will finally get the respect he deserves?

What do you think has lead to Clemson being able to recruit better talent at OL?

The 2020 class will be one of the top line classes Clemson has ever signed.

I guess putting more offensive linemen in the NFL is the next step. Hyatt should play a long time in the league. Taylor Hearn has a shot as well. As they put more players in the NFL, the better the recruiting will be on paper.