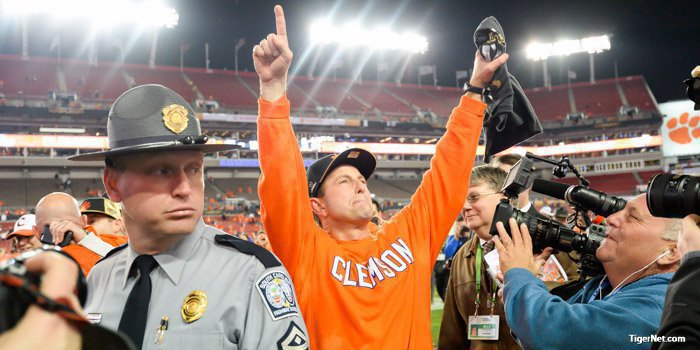 I spent a few hours Monday compiling data on four and five stars from the rankings on rivals.com in two different forms.

First, I looked at the number of four and five stars from nine southern states over the past four years and next year. Second, I looked at five stars, top 100, top 250 and four stars for the four playoff teams (Clemson, Alabama, Georgia and Oklahoma) and I including data from South Carolina since I have many Gamecock listeners on my radio show.

The first data revealed some very interesting results. First is the amazing success Clemson has had despite the state of South Carolina being down in terms of talent over the last four seasons.

I included data from the last four classes and the next class (2019). Here is the break down in terms of five star prospects:

Here is a break down of the number of four stars from each state:

Here is the total of four and five stars combined:

The fact that Clemson has been built into one of the nation’s top two or three football programs is amazing considering how bad the state of South Carolina has been. This staff has had to go to bordering states and have even had to expand the reach to places like the Northeast, Kansas, Louisiana and even Hawaii.

When South Carolina had three great years under Steve Spurrier they did it by taking advantage of rare five stars in South Carolina like Marcus Lattimore, Alshon Jeffery, Stephon Gilmore and Clowney). When that well dried up, the Gamecocks couldn’t expand their recruiting reach. As a result, the Gamecocks are 24-26 the last four years. Clemson’s staff was able to go into other recruiting areas, and as a result, the Tigers are 50-6 in that same time frame.