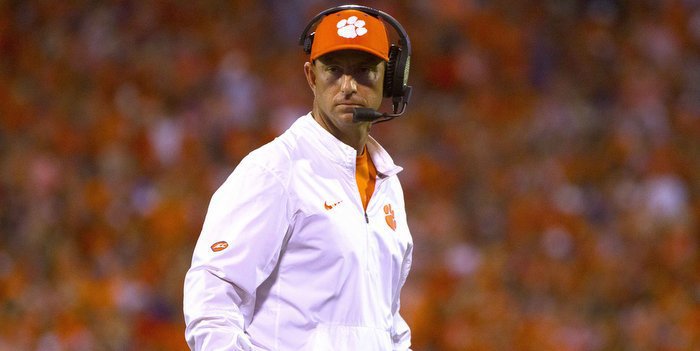 I spent yesterday still looking at the fallout of the Clemson-Louisville. Part of me is still amazed that some of the national media have given Louisville more credit than Clemson even though the Cards were the favorite and lost.

I was also taken back that so many people made a big deal of Boulware and his neck tackle on Jackson. That was such a minor part of the story.

He took over a program that used to have its hands full with Maryland, NC State, and Wake Forest and turned it into one that has beaten ten top ten teams.

Dabo had completely shut the door on his arch rival and passed them like a lapped car in NASCAR.

He took over a program that recruited good players but mostly lost out on elite five-star talent and turned it into a recruiting power that takes a backseat to no one.

He took over a program that had a hard time selling out games and turned his home field into perhaps the biggest advantage in the country. Oh yeah, Clemson now has the longest home winning streak in the country at 19 games.

He has his team and the fans believing in his teams can and will beat any team they face.

But perhaps his biggest victory is he has inspired us to follow his leadership. Dabo has sold the board, the president, the athletic director, his staff, his players and the fans on his vision and we have followed his leadership.

His optimism is contagious. His attitude is refreshing. His wholesomeness is missing in this crazy world we now live in. He is genuine to the point where if you didn't know any better you would think it is a show. But Clemson people know better.

Before he was named interim coach here, I said all he has to be is Dabo. I said that is good enough. What he has turned into is more than just a football coach. He has turned into the face of this program and one of the brightest stars in college football.

Dabo says the fun is in the winning. Well, Saturday night was perhaps his biggest regular season win, and to me, it was the most fun I have ever had at a football game.

Dabo also says the best is yet to come. Like almost everything else he says, I believe it.