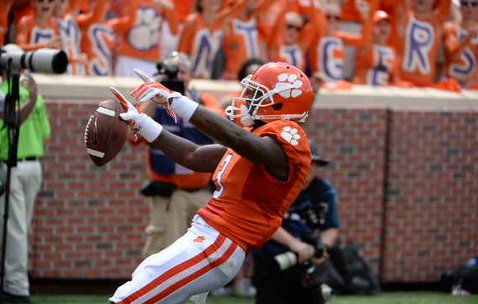 Positives to Build On

After staring at the ceiling in a hotel room in Moultrie, GA Saturday night,  I-75 and I-85 for a few hours Sunday, and tons of emails and texts Monday on what went wrong, I wanted to turn the page a little a look at what went right in Tallahassee. What can be built on?

In fact, a lot went right and there is a lot of reason for optimism moving forward.  First and foremost is this quarterback controversy is now over.  Deshaun Watson

Deshaun Watson
Fr. Quarterback
#4 6-3, 204
Gainesville, GA
View Full Profile is the more talented player and now the staff can move forward with his development and the game plan with him at the helm.

Watson may be as good as many of us think.  If he is, the future has never been brighter at Clemson.  Even if he is close to what we think at this point, then things should be extremely exciting for the next three of four years.

This is perhaps the most advanced true freshman quarterback I have seen.  The things I love the most about Watson are his poise and composure.  He went into Athens, GA and ripped off some beautiful passes in his very first college drive.  Shortly after touching The Rock for the first time in a game, he had an almost perfect performance against South Carolina State.  On the road at the nation's top-ranked team against a future NFL secondary, he once again impressed.  My gut tells me Clemson has something very special here.

I fully understand that Watson is still limited because of experience and I fully expect there to be some growing pains which can be expected anytime you play a true freshman at quarterback.  But at this point I am ready to watch it and see how he develops.

Other than Watson, there were several positive signs Saturday.  The defensive line was dominant.  The Tigers held FSU to negative 12 yards rushing in regulation and sacked Sean Maguire five times.  Grady Jarrett

Stephone Anthony
Sr. Linebacker
#42 6-2, 244
Polkton, NC
View Full Profile was a beast Saturday night.  He was disruptive and his physical presence was impressive.

In the secondary MacKensie Alexander

MacKensie Alexander
RS Fr. Cornerback
#2 5-11, 190
Immokalee, FL
View Full Profile showed why he was so highly thought of coming out of high school.  Alexander looks like the shutdown corner this defense has been missing the last three seasons.

On offense, the wide receivers made several big catches against one of the top secondaries in the country.

The offensive line was not dominant but it more than held its own against a deep and talented defensive front.

As I mentioned in yesterday's blog, there were too many crucial mistakes to expect to win on the road against the nation's top ranked team.  However, there were a lot of positives as well and this program has a chance to build upon many of those.