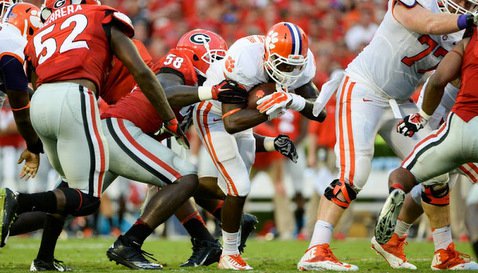 Clemson and Oklahoma will have a rematch for their 1989 Citrus Bowl where Dexter Davis batted away a pass from Jamelle Hollaway on the last play of the game to preserve a 13-6 Clemson win.

This year Bob Stoops brings in an 8-4 squad that is coming off a devastating loss to arch rival Oklahoma State 38-35 in overtime this past weekend.  In this game the Sooners blew a 14-point lead with less than five minutes to go.  Oklahoma gave up a 43-yard pass with just under five minutes left and then a back-breaking 92-yard punt return in the final minute of regulation to tie the game.  The Cowboys went on to win with a field goal in overtime.

Like Clemson, Oklahoma has been hit by injuries including the starting quarterback.  Sophomore star Trevor Knight went 162 of 279 for 2,197 yards with 14 touchdowns and nine interceptions.  He rushed for 340 yards and five touchdowns but has missed the last three games with a neck injury.

Freshman Cody Thomas has taken over for Knight and has struggled.  He has completed 30 of 66 passes for 342 yards with two touchdowns and four picks.

This past weekend their superstar also went down too.  Samaje Perine suffered an ankle injury Saturday.  Perine is a true freshman that has rushed for 1,579 yards and 21 touchdowns.  The 243-pound power back broke an NCAA record with 427 yards rushing against Kansas earlier this season.

Oklahoma features Alex Ross and Keith Ford in its running game.  Ross is a 220-pound back who rushed for 564 yards and Ford is a 205-pounder who has 324 yards rushing.

Oklahoma lost four games this year but three of the four losses came to very good teams in Baylor, Kansas State and TCU.  The only bad loss came to Oklahoma State.  But the only teams they beat that have winning records are Louisiana Tech and West Virginia.

This game has a bunch of terrific story lines.  Two of the nation's top freshmen are hurt and it is not known if either will play.  Fans will keep an eye on Perine and Deshaun Watson

I would not be surprised if we saw another low-scoring game like we did over 25 years ago.