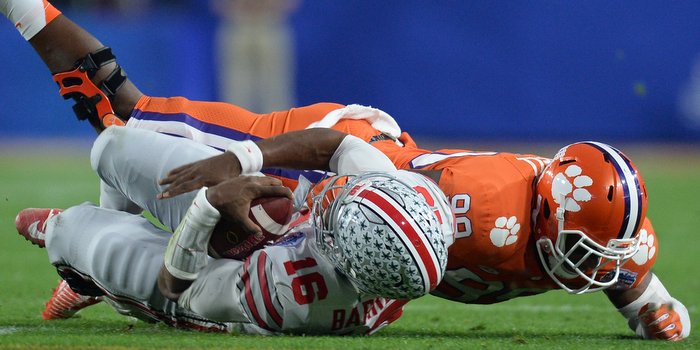 It wasn't easy getting to the desert again, but boy was I glad we got a chance to witness what might be the second best victory in Clemson football history. Now the Tigers get another chance at perhaps the school's finest moment.

Going in I felt Clemson was the better team, but I had no idea it would be a 31-0 domination. Clemson won the line of scrimmage and looked like the faster team all night.

There was a lot of talk about Ohio State's Urban Meyer and his impressive record he had when given more than one week to prepare for an opponent. What was not discussed was Brent Venables and how his defenses look when given time to prepare.

In a tenure of dominating defensive performances, this may have been Venables' most impressive. Clemson gave Meyer the first shutout of his career. Clemson held the Buckeyes to nine first downs. OSU entered the game with one of the most powerful rushing attacks in the country, but was held to 88 rushing yards. The Tigers held Ohio State to just 215 total yards.

Many of us spent a lot of time analyzing this game for the past few weeks, but raise your hand if you had Clemson outrushing Ohio State 205-88.

The Tigers defensive line harassed Buckeye quarterback J.T. Barrett all night. The Ohio State junior went just 19 of 33 for 132 yards and was intercepted twice. Clelin Ferrell was the defensive MVP after spending the evening in the OSU backfield. He ended the night with a sack and three tackles for losses. Carlos Watkins added two sacks as well. Other defensive stars included Van Smith and Cordrea Tankersley who had the two interceptions.

Offensively, the Tigers had 24 first downs and 470 yards against what was hyped as one of the nation's best defenses. Raekwon McMillan and Malik Hooker were as good as advertised, but Clemson still managed 205 yards rushing and 265 yards through the air.

Sometimes time of possession is a meaningless statistic, but I thought it was huge in this Fiesta Bowl. Ohio State had the ball for only 22:47.

One stat that is usually relevant and was again in Glendale is third down conversions. The Tigers converted eight of 17 third downs, while Ohio State converted just three of their 16 third and fourth downs.

Deshaun Watson continues to amaze because no stage is too big for him and this one was no different. Watson was 23 of 36 for 259 yards with one touchdown and two interceptions. He also added 57 yards and two scores on the ground.

Wayne Gallman had 85 tough yards and a score on 18 carries. He also had a ten yard reception.

Clemson receivers had a hard time with footing, but several made huge plays. Mike Williams had six catches for 96 yards. It was fun watching him match up against some of the best defensive backs in America.

Hunter Renfrow was once again big in a huge post season game. He had five receptions for 50 yards including some key first downs.

Deon Cain, Jordan Leggett and Artavis Scott were held in check, but the same cannot be said for C.J. Fuller who had three catches for 45 yards including a beautiful diving touchdown reception.

Speaking of unsung heroes. Did anyone talk about Andy Teasdall being a weapon? He had a net average of 41.4 yards punting and kept the Buckeyes hemmed up with bad field position most of the night.

This one was one for the ages. One that none of us will ever forget. It was Ohio State's first bowl shutdown since the 1921 Rose Bowl. It proved Clemson is an elite program and it wasn't just Watson, it was a total team effort.

I entered the stadium impressed with Ohio State's program and their fan support. I exited the stadium even more amazed at how dominant Clemson was. I also feel like if these two teams played again tomorrow the outcome would be just as dominating.

Now it's on to Tampa and a third national title game. If the semifinals were any indication, Clemson has to be confident heading to next Monday night.

NFL.com projection says not to expect much from this rookie Tiger
Post your comments!