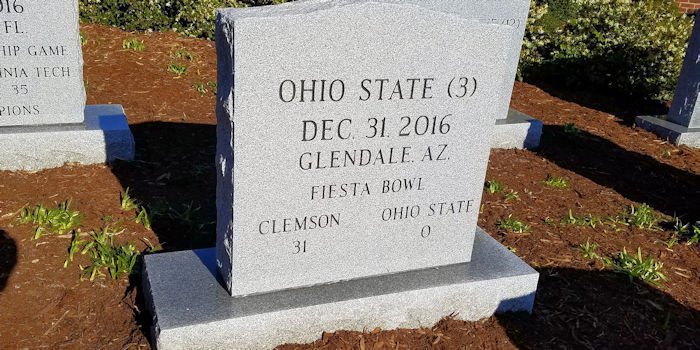 LOVE your show!! My question is about lack of recent night games in the Valley. Clemson vs NC State is a top-20 matchup and could be considered night-game worthy. It seems recently most of those games involving Clemson that are away games end up night games (6p or later). Can the ACC Network next year give us some leverage? It seems that ABC, ESPN etc would favor an Ohio St @ Purdue 7p kickoff vs a top 20 Clemson matchup vs whoever in Death Valley. Your thoughts?

Thanks for the kind words. I know Clemson fans don’t want to hear this, but Ohio State is a huge draw for TV, especially when they are on the road.

Here is a list of viewers for the games I could find the data on this year:

Finally, I was told the Big Ten contract calls for a night game slot a few times a year and Clemson's slots this week that were available were noon and 3:30. I guess we got the best of those two time slots this week.

You answered an email about TDP and the RoH. You mentioned a few players that should get consideration like Watson, Wilkins, Boyd, etc...

1 Why isn't Greg Buckner in the RoH?

2 What can we do to get him in there?

I have no problems with Buckner and the RoH. He was a great player who helped us to some incredible wins and great years. I don’t have any issue with it. Good point.

I’m always proud of our ever-growing group of NFL players and how well they represent Clemson. Whenever those guys have a bye week you’re gonna see some of them on Clemson’s sidelines. I like all tigers are so proud of CJ , Sammy , Nuke , Deshaun and all the rest.

However , One thing has puzzled me. Why then does Nuke have a bitter taste about Clemson. I know folks have noticed when stating their school background, he says Daniel High not Clemson. Did I miss something. Still gonna be his biggest fan but curious about the reason…. Go Texans !

His high school and college teammates have told me he is just a different guy. One of his former teammates told me Nuk feels slighted that Sammy got so much attention and love while he was here. He has made some comments in the past that have raised my eyebrows.