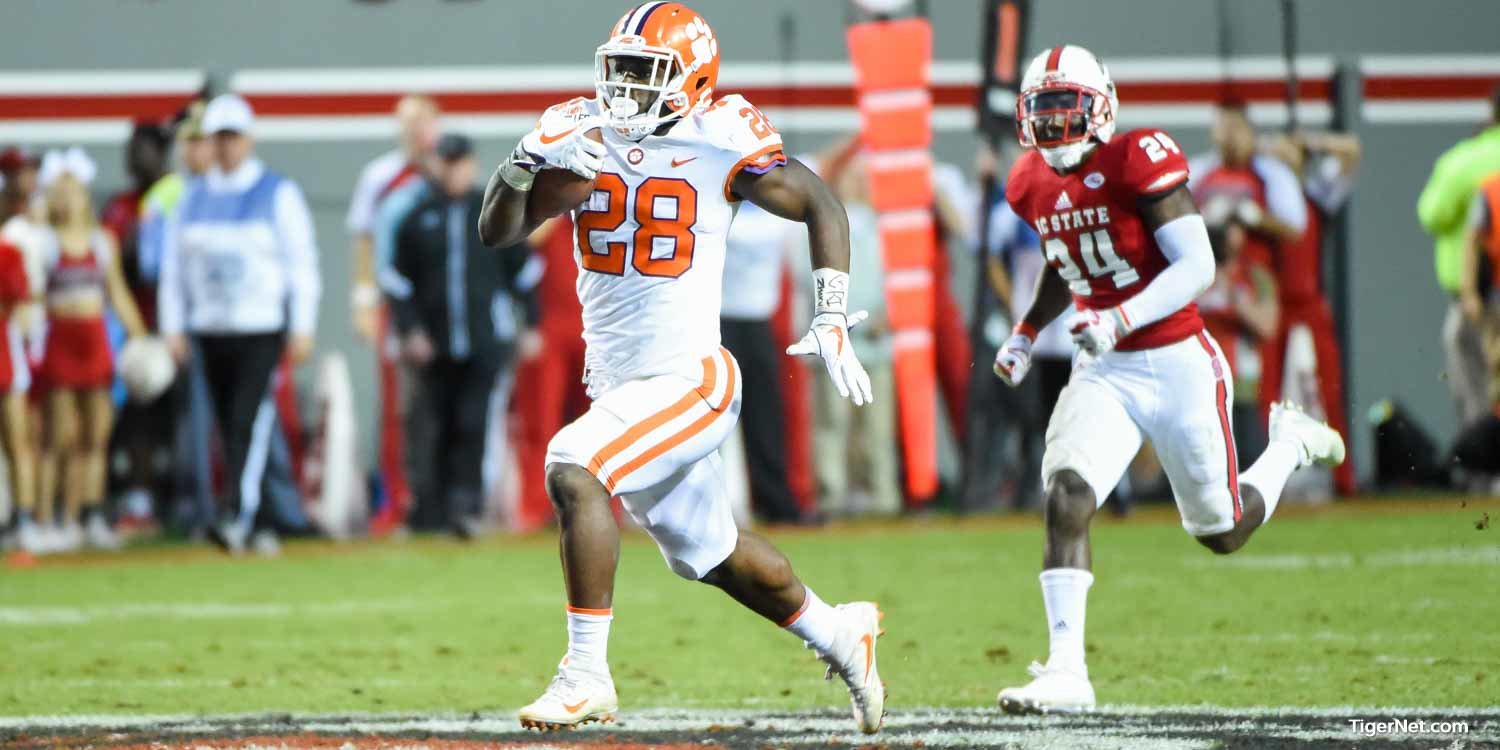 I doubt you could find many Clemson fans that did not expect the Tigers to be 6-0 at midseason. The view of the results may be a bit jaded because of the Syracuse game but the record is perfect, and you can't beat that. The offensive has discovered that backs can run with the ball and the balance that creates is what any team looks for. The offense can be very, very good but honesty compels me to report that the defenses we have already faced are not nearly as good as the ones we face the rest with the exception of A&M which is a very good defense and Louisville which is very bad.

Games against NC State have a way of working out but they usually are a 60-minute battle. State's defense is ranked 35th in total yards and A&M's is ranked 20th. If Clemson's offense continues its roll Saturday we can all say a big Amen and I told you so but State is a far different bunch than the teams we have played so far regardless of the point spread. The pieces of the puzzle are there for Clemson but the competition is much better.

The game Saturday is for all the marbles in the Conference because it is unlikely that either team loses twice but as we saw over the weekend, crazy things happen. The road to the ACC Championship game starts Saturday and I expect a knock down drag out game. Let's hope that hope that Clemson plays up to it's standard and the march to the playoffs continue.

Thanks for your email. I agree that this one appears to be for the division title. Boston College has only one conference loss, but they have a tougher schedule ahead. It’s clear that State is the second best team in the division, but what is not as clear is just how good the Wolfpack are. The schedule has not shown us anything yet. I was looking forward to the West Virginia game before it got canceled due to the hurricane.

I think Ryan Finley might be one of the two best senior quarterbacks in the country. It helps that he has a big, physical corps of wide receivers. What also helps is the fact that State doesn’t take sacks. They have given up fewer sacks than any team in the country the past two years partly because Finley gets the ball out very quickly. This could negate Clemson’s advantage with its defensive line. State didn’t run the ball well early, but it has improved in that area the last couple of outings.

I do think Clemson will have some opportunities offensively in this one. State’s defensive line has been a surprise, but Clemson has the weapons to take advantage of some mismatches. I would anticipate their defense spending a lot of their weekly game planning to slow down Travis Etienne. Therefore, I expect great matchups for the Tiger wideouts. My guess is they will feature a lot of two high looks in order to take away the big play. Clemson’s short passing game could have a big day.

Finally, I think the atmosphere could be very good Saturday. This home schedule is not great and this is a rare opportunity for a ranked opponent coming to Death Valley this season.

Speaking of Ring of Honor - this might be before your time, but some of us old guys are starting a campaign to get Herman McGee in the ring of honor. No one on this planet exemplifies the Clemson spirit like Herman did. He was a father figure, big brother and friend to 1000s of Clemson athletes during his time at Clemson. He is one individual that everyone loved and he loved anyone who put on a Clemson uniform.

I never had the pleasure of meeting Herman McGee, but I have had the opportunity to sit down with Fred Hoover on three or four occasions where he as gone into detail about what made Mr. McGee so special. It is clear he is one of the most admired men we have had in the Clemson athletic department. Doc Hoover said every year the number of former athletes that came by to see him after they graduated was amazing.

I think it is time to put Herman McGee into the ROH.

Hey Mickey, I like the way the offense is rolling right now with the balance but where have Milan Richard, Braden Galloway, and Garrett Williams gone in the passing game recently? Would like to see a little more production from that group in the second half.

They have run the ball more in recent weeks and Garrett Williams has been one of the best blockers in that rushing attack. It also seems they have played more four-wideout sets lately. I do expect Galloway to become a bigger part of the offense as he gets deeper into his first season. I like the tight ends, but every time you throw it to a tight end, that’s one less pass to Higgins, Ross, Rodgers, Renfrow or other wideouts.