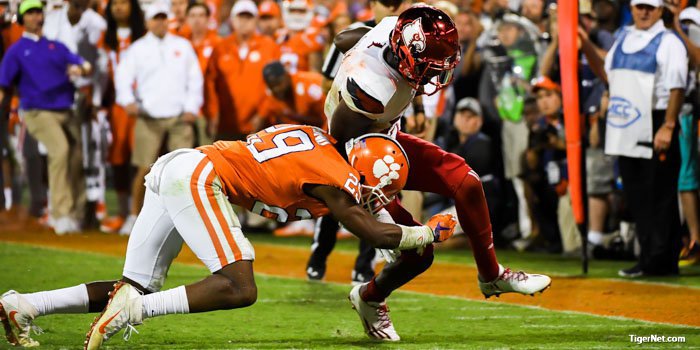 In the early morning hours Sunday at our tailgate I told some friends, "If you wanted to see a game as good as that one, you might want to keep your cholesterol in check and eat well and exercise because it might be a long time before we see anything like that one again."

By my count, I have seen about 250 games in a Death Valley, but that was the loudest I have ever heard the place, and it was the best football game I have seen regardless of the venue.

This one had everything you could be looking for and more. The atmosphere started at ESPN's Game Day and the 8:22 PM kick meant the fans were in the stadium earlier than I have ever seen them. The place was electric, and I think the fans deserve a lot of credit for that win.

If you wanted defense, you got. Both defenses were dominant in the first quarter. Clemson's defense held Louisville in check in the first half by pressuring Lamar Jackson. Turnovers and quick scoring drives meant the defense played 99 plays.

If you wanted offense, you got it. Both teams combined for 78 points and over 1,000 yards.

If you wanted superstars, you got it. Lamar Jackson and Deshaun Watson put on a show. These playmakers lived up to the pre-game hype.

If you wanted a story of redemption, you got it. Deon Cain was written off by some, but Clemson doesn't win without his two touchdown receptions. Jordan Leggett has been criticized, but his game-winning touchdown provided the difference. Marcus Edmond was a forgotten man a season ago, but he made the game-saving tackle and had 12 tackles in the game. The Tigers' offensive line gave Wayne Gallman running room, and both answered the bell. Clemson special teams have been beaten up over the last year, but they were huge in the win Saturday. Andy Teasdall averaged 42 yards per punt. There was a lot of talk about Clemson's safeties in the last 365 days, but Van Smith had 15 tackles.

This one played out a lot like I thought it would. It was a long emotional roller coaster. Clemson was better across the board, and the front seven was a factor. Carlos Watkins made a couple of huge plays. It was the Tigers depth that was a difference. Albert Huggins had two sacks. Clelin Ferrell provided pressure all night, and Christian Wilkins was once again one of the best players in the field. Ben Boulware had 18 tackles.

Yes, there were mistakes. Five turnovers could have been devastating, but another way of looking at it is the Tigers turned it over five times and still beat the third-ranked team in the country.

So mark this as one for the history books. I have never seen one like this and am not sure I will ever again.