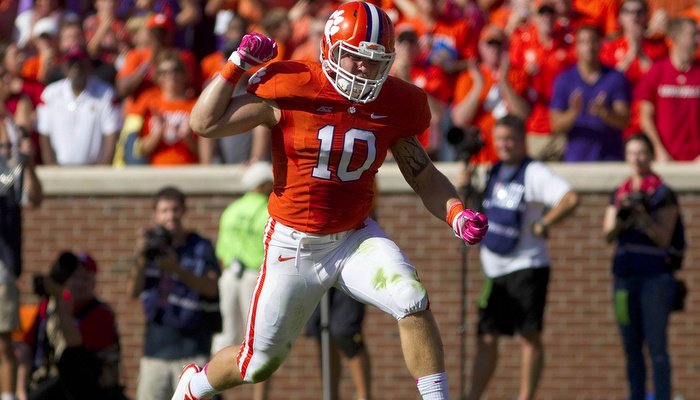 Saturday's game with Louisville was a strange one indeed.

Deshaun Watson
Fr. Quarterback
#4 6-3, 204
Gainesville, GA
View Full Profile 's hand. But the defensive effort, the special teams and the crowd turned that feeling into a different emotion when the Tigers pulled out a thriller 23-17 on the game's next to last play from scrimmage.

Some of the stats from the game indicate just how strange this win was. Clemson won despite not scoring an offensive touchdown. The Tigers won despite having only 72 yards rushing, 157 yards passing and 229 total yards. Clemson won a game where it had only 12 first downs and went a dismal 2-16 on third down.

This game featured two terrific defenses that feasted on two struggling offenses. Neither team converted a third down until the third quarter. Both teams stacked the box to stop the run and dared the opposing team to throw the football. In many ways this looked like a game from the 1980s.

Clemson's defense won this game. They did it by shutting down a pretty good running attack with three good backs. They did it by forcing turnovers and even scoring a touchdown. They did it by winning the field position battle and they won it by keeping the Cardinals out of the endzone on the game's next to last play.

Perhaps the biggest accomplishment for the defense was the idea of keeping the crowd into the game after Watson's injury.

On offense the Tigers struggled. Give Louisville credit. They entered the game with the nation's number one defense, but the game changed when Watson exited. With both defenses set to stop the run and pressure the passer, yards and first downs were scarce. It became a field position battle.

One of the biggest storylines of the game was the the comeback by players many of us had written off. I had been down on Adam Humphries

Adam Humphries
Sr. Wide Receiver
#13 5-11, 193
Spartanburg, SC
View Full Profile as a punt returner, yet it was Humphries who had one of the biggest plays of the game with his 72-yard punt return for a touchdown.

I had been down on Ammon Lakip but Clemson doesn't win the game without Lakip's three field goals.

Many of us were down on Cole Stoudt

Cole Stoudt
Sr. Quarterback
#18 6-4, 231
Dublin, OH
View Full Profile but the senior quarterback put aside pain in his left shoulder and got the Tigers past the finish line.

In the end, Watson's injury is the story. How long he will be out is the major storyline of the next month. Until he returns, Clemson will have to continue to find ways to win games. I'll take a few more strange wins.