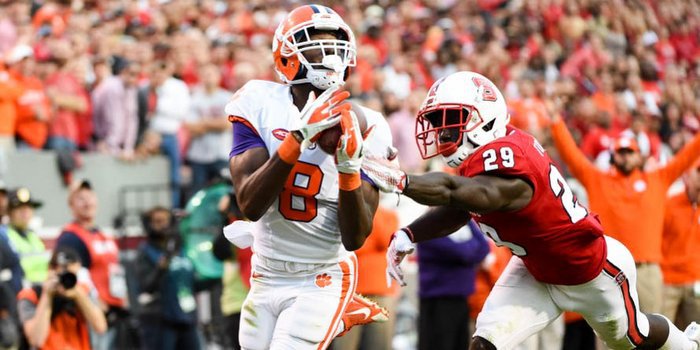 Light at the End of the Tunnel

Monday was the first day of spring practice at Clemson and one guy who a lot of us wanted to know about was Deon Cain.

We got our answer when Dabo Swinney met with the media and said, "I'm pleased with Deon. He's not going to practice, and that's really what is best for him. He's going to be here every day. He's in the meetings. He's worked out. He is going to be at practice every day. But the biggest thing with Deon is we have just removed that competitive piece of football. I really don't need to see him run a comeback, to be honest with you."

I agree with Dabo on this one, because he knows the player more than any of us and knows what buttons needs to be pushed. However, I do hope there is light at the end of the tunnel for Cain. I hope he can see the disciplinary action has an end and can continue to find his way back to the good graces of the staff very soon. It sounds like that is the case.

"I am not worried about the football side of Deon Cain," Swinney added. "The football side of Deon Cain is going to be special if I can get him dialed in on other things that really are more important. So we have really just removed the competitive part of this spring because I don't want him to get distracted. I want him to stay focused on what he is doing and handling his responsibility to this University and to this football program."

That is so important in this case. Cain made a mistake and needed to pay a price, but in my opinion, he has paid a big price. Missing the Orange Bowl and the National Championship game had to hurt Cain. I think it would hurt anyone who had to endure that punishment. I would have hoped Cain would be back to full speed at practice this spring but yield to Swinney's judgment in these cases because he has all of the information. My only hope is that Cain can see the hope. It sounds like Swinney's plan has the desired effect.

Swinney makes a good point when he says Cain chose to come back when he didn't have to make that choice. "He didn't have to come back here. He could have packed up and move on and said 'Hey the heck with that," but that is what I love. He has manned up. He appreciates it. He really does. He appreciates the opportunity he has got here. He recognizes he has some things that he has got to improve in and that is what he is doing."

I think we all hope the result will be a matured superstar that is ready to be a leader on and off of the field. Hopefully, this story continues to stay on that course.