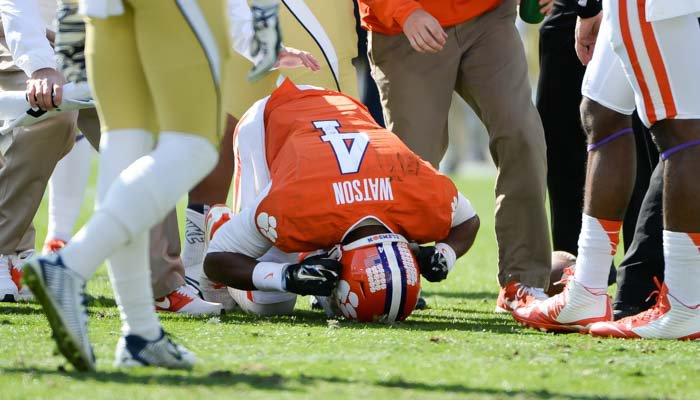 This one was a lot like several games earlier this year. When Deshaun Watson

Deshaun Watson
Fr. Quarterback
#4 6-3, 204
Gainesville, GA
View Full Profile was in the game the Tigers offense looked good. In fact, when Watson got hurt at the 14 yard line it looked like the Tigers were about to take a 10-0 lead in the first three drives.

But like much of this season, injuries became a factor and the Tigers' offense struggled again.

Cole Stoudt
Sr. Quarterback
#18 6-4, 231
Dublin, OH
View Full Profile threw the first pick six I told Ryan that unless Watson comes back in the game or Georgia Tech starts turning the ball over, this one was over.

The first pick six was a 13-point turnaround. Despite missing the extra point, Tech turned a 10-0 deficit into a 6-3 lead.

My prediction turned out to be right. I thought Stoudt's confidence would sink even more and the offensive line would have a hard time blocking. Without a running game, the Tigers couldn't throw the ball downfield and there were few answers for the rest of the day.

The defense played well enough to win. They held an offense that had been averaging 39 points per game to only 15 offensive points. But the energy and hope was gone with the news of Watson's knee injury.

Players and coaches' commented after the game that they knew they faced an uphill battle after Watson left the game. The Clemson fans in the stadium knew it. Heck, even the Georgia Tech fans sitting near me knew it. The entire stadium felt different once Watson got hurt.

The Tigers were actually lucky this kind of disaster didn't strike earlier this season. It took a punt return, a defensive touchdown and a last second goal line stand to beat Louisville. It took a dropped pass at Boston College to win that one in Chestnut Hill. Clemson struggled with Syracuse and Wake Forest despite both being bad football teams.

The fact of the matter is that this offense has major issues. The offensive has a hard time in the run game. The backs are not ultra talented. Stoudt has physical limitations and appears to have lost all confidence.

Now the season comes down to the regular season finale against the arch rival. To me this is as simple as it gets. If Watson plays and is healthy enough to be close to his abilities, Clemson can beat South Carolina. If he doesn't play then that one might look an awful lot like what we have seen several times this season.