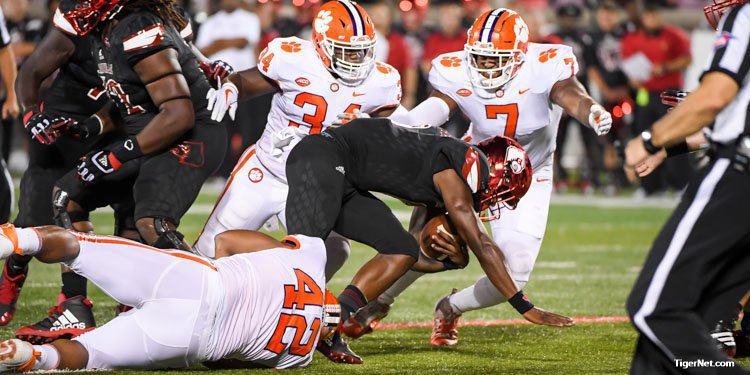 In watching the Louisville game, I had the same feeling as when watching us thump Ohio State around. I would be lying if I didn’t utter something like “this is pretty unbelievable” to myself, in some sort of state of complete bewilderment. I was at Clemson during the Tommy West days. Dabo and our coaches, all of them, I would put up against any – and maybe in more sports than football. At this point, tell me if they took over basketball, if things would go up or down? He would hire the X and O guy and go get the best players – and they would buy in with their heart. 6 or 7 years later, what would it look like? To take it a step further, reading about an Alabama OT commit saying he “loves Clemson” and can’t wait to make an official trip to Clemson, is another sign of what incredible progress has been made. I don’t remember reading those articles in the mid 90s. Watching the Louisville game, it dawned on me that the year to year betterment of the program isn’t just going to stop, and that it’s possible that we are still getting stronger as a program – even over the last few years. What else can you say when the 4th string running back breaks an 80 yarder and really didn’t have a good hole to run through? 4th stringer… its almost funny. I don’t know… I am just floored at what I have been seeing the past year or so. All the while our coach is so southern his name is “that boy”. Am I dreaming?

No, you are not dreaming. This is really happening. He is an amazing person and an incredible leader. I think Dabo Swinney could be successful at anything he set his mind to, basketball included. This is the pinnacle of Clemson football. I am enjoying every minute because I know this won't last forever.

Excellent explanation of what took place Saturday! I watched the game, but really couldn't figure out what BC was doing that was causing our offense so much trouble. Now I understand. That makes me feel better.

Thanks, and Go Tigers,

Thanks for the kind words. We probably need to talk schemes more often, but some people don't like it. Saturday was a great example of trying to understand why something happened. This can be a complicated game if players execute a game plan. Sometimes the better team is just too talented on that Saturday. I was fascinated with BC’s game plan and the way they executed. Also, field position was a huge key and that is something we never pay enough attention to.

Hey Mickey. Listen to you show most mornings on the way to work. Enjoy listening and appreciate what you do. You may never read this but it is something that has been on my mind for a couple of years now and thought you might like to hear my perspective. I am a 1991 graduate of CU. My dad is a 1968 grad. We have had season tickets for about 25 years now and enjoy going to the games. I attended the Orange Bowl against OU in Miami, the natty in Glendale and the natty in Tampa. My son has grown up loving the Tigers and he always thought he would attend school at CU. He was a very good student at a competitive high school here in Greenville. He applied to CU and was set on that being the place he would attend. He also applied to Auburn, Wofford and Samford. He was accepted at all three of those schools and was waiting on CU. I’ll never forget the day he got the letter telling him that he was accepted to the Bridge at CU. Needless to say he was upset. He rounded up all of his Clemson gear and brought it downstairs in a trash bag and said get rid of it, I’m going to Samford. Now time has changed his attitude and he certainly pulls for CU and even attended the Orange Bowl and Tampa natty with me but he will never be what he was in his loyalty. He was offered academic scholarship money at Wofford and Samford and after visiting Samford he was sold. He has done very well there. Maintaining his academic scholarship and making so many friends. He was asked by friends after his freshman year if he wanted to transfer to Clemson and he said no way. He was NOT a kid that needed to go to Tri-County to prove himself and that is exactly what CU had told him by putting him in the Bridge. I say all of that to say this…I think Clemson has changed the culture of the student body by who they are admitting and also by putting kids in the Bridge that don’t belong there. When half of your students are girls from Chicago, Los Angeles and New York, you are changing. My son would’ve been at EVERY football game and EVERY basketball game had he attended CU. Thankfully, he did not and he is VERY happy at Samford and wouldn’t change a thing. We can look back and see God’s hand in all of this and we are thankful for the way that it turned out. In my opinion, Clemson turning down triple legacies that are very good students, is hurting the loyalty and changing the student body. I know that my family does not tailgate and go to games like we would have had our son attended CU. I still love my Tigers but my loyalty isn’t what it used to be. The culture there is changing if you ask me and they have no one to blame but themselves. You make choices and those come with consequences. In this case, it’s kids that don’t want to go to the games. Just my opinion.

I am sorry it didn't work out for your son here, but it sounds like he is happy. I am not sure there is a perfect answer to the student ticket situation here at Clemson, but I know this is a complicated issue. My uneducated guess is that the camping out situation works best but block seating should have been eliminated. I also think there should be an option for students who want to pay for tickets, so they are guaranteed a lower deck seat. One thing I do know is that seats are at a premium and demand is not going down anytime soon because the best is yet to come. I also know the demand for applying to the university continues to increase yearly. This is the price of success. I hope your son continues to have success.