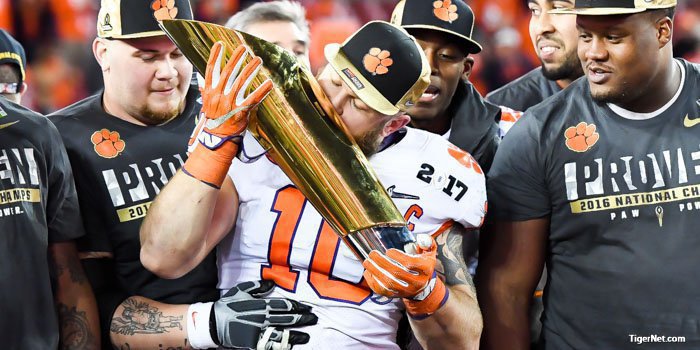 It is great to be a Clemson Tiger, but I have a few questions for you. Everyone loved Ben's speech after the game Monday and I wanted to know do you think Dabo is going to send any off those guys or even Chad Morris a championship ring ? Also have you heard anything about recruits that we may get on singing day or any updates in recruiting?

I don't think any rings will go out to anyone not on this team or staff. Phone calls, letters, and notes, but not rings.

The only position Clemson is still recruiting for this class is running back. Travis Ettiene is here this weekend as the only official visitor.

With the announcements that Coach Dan Brooks is retiring and Coach Marion Hobby is moving to the NFL, I hope that the old saying all good things must come to an end does not apply to great play of the Clemson defense. Without a doubt, talent is why Clemson has done the great things it has done the last few years but that also has to include the talent and stability of the coaching staff. All one has to do is read the bios of Coach Brooks and Coach Hobby to see what they and their players have accomplished and to realize how much they will be missed at Clemson.

Clemson is a great place for a coach and I expect Dabo has a plan already in place and I hope his hire of Mickey Conn does not backfire now that both the D-line coaches are leaving. Players learn from coaches that have been there and that absolutely fits Coach Brooks and Coach Hobby. The next week or so will go a long way in hopefully stopping the bleeding on the coaching staff and in finding a well known, well respected D-line coach that the players will learn from, work hard for and play hard for. I am sure that the players, recruits and all Clemson fans will be happy with whomever Dabo hires but I cannot help but hope the NCAA approves the extra coach for next year or things could get sticky really fast.

Those guys did a great job here and deserved a lot of credit. However, Dabo has proven to be great at hiring coaches. He has a big budget to work with, and this is an attractive job. I would be surprised if Dabo doesn't hire great coaches for the defensive line.

Hope you and your family are having a good 2017 so far.

I enjoyed your blog about the journey, and again, while everyone focuses on beating Alabama, this season had some games for the ages. Many do not like the offseason, but we really need this one to digest all that transpired over the last 15 games, because there have been a lot of years where beating a top 3 Louisville in Death Valley, beating a ranked FSU team in Tallahassee, the monumental beat down of SC, winning the ACC, beating Auburn on The Plains, beating GT in Atlanta, or shutting out a number 2 ranked Ohio State in a major bowl game would make a season. Yet, we did all of that AND won the National Title. I believe we are going to win another National Title at some point during the next few years, but I am not sure we will have another season with so many big wins and great games.

Thanks for the nice words. I will spend this offseason watching some great games from this season on the DVR. Great memories.

I, like you, am still celebrating our wins! The end of the season run and the playoffs created legends! Just like we think back on Jeff Davis, Homer Jordan and Perry Tuttle, our kids will look back on Boulware, Watson and Williams. Let's do it again!!

That said, is there any way our athletic management can oppose ACC scheduling before they release 2017? There is no chance the defending national champion should play on Thursday or Friday. Should never happen. First and foremost, I do not think it is good for the student athletes at any level to play on short rest. I know baseball, basketball and other sports play mid-week games, but they don't have a 350 lb DT hitting them at full speed.

Let's get out in front of this schedule before the ACC powers release a schedule that every listener and blogger complains about!

I would think Dan Radakovich has had conversations with the ACC about the schedule. I hope the ACC protects its best products in the future. Good point. I guess we will find out in the next few weeks.

The great pride that Clemson fans have in winning the National Championship will last forever, or at least until the season starts this year. In an incomplete article in the January 15 edition of the Greenville News, Brad Senkiw, writes that National Titles since 1999 titles are reserved for Alabama, Ohio State or Florida and not for other schools like Clemson. This type of unsubstantiated bias is why winning is so hard for Clemson. One can use any starting point to make a case but since Senkiw used 1999, he failed to add Florida State, USC and LSU to the list of schools that usually win since they all won the same number of championships as Ohio State and Florida. Had Senkiw used 1981, he would have had to admit that Miami won as many titles as Alabama but you won't hear that in the media.

Clemson has to fight for everything it gets and the fight against perception is maybe the toughest one to win. Dabo said when you do something once, you can do it again. Hard work, talent, good coaching, luck with injuries all go into winning any championship but getting over the perception hurdle may just be one of the toughest. National Signing Day is a couple of weeks away so let's hope the great young men considering Clemson see reality not perception and will choose the Tigers so we can continue not only fighting the other teams but also the media bias that is out there. That fight worked for Clemson and Donald Trump in the last few months, so as Dabo said, it can happen again. GO TIGERS!

Dabo has changed the perception of the Clemson program by changing from within the program. Reputations take time to build. Clemson's clout is changing and changing fast. Ask Alabama fans about Clemson. Ask Ohio State. This is a different world and Clemson doesn't have to take a back seat to anyone.

Just read the Friday mailbag. So what is the real story with Cordarrian Richardson. All I know is it had something to do with his school. Can you shed some light on it for me.

There is an investigation into his high school changing grades and transcripts for several athletes. When it this came to light Clemson had to move in another direction. I don't think you will see him start at the D-I level next year.

Hi Mickey. Thanks so much for your blog. I first started reading it about 17 years ago while I was stationed at Yongsan Army Garrison, Korea. I wonder if you can ever get a sense of how much you and the rest of Tigernet make deployed soldiers on the other side of the globe feel like they're back home. It means a lot to us. So, it's puzzling to us that someone who is nestled in those hills would ever want to leave. Do you have anything that you can tell us about Jake Fruhmorgen? I'm grateful to him for choosing Clemson and wish him well, but what can we learn from this?

Thanks for the very nice words. Our country can never say thank you enough for your brave service and sacrifice. Heroes leave their families and homes to defend this country around this world and for that we are forever grateful. Words can't describe how we feel about our brave men and women who defend our country. I don't know all of the factors in the Fruhmorgen case, but this place is not for everyone, and I wish him well.

A total of five guys have now said they are leaving the team. Please tell me that we are going to sign more than the 13 guys that are committed right now. Dabo has to have a few cards up his sleeve right?

They figured four of those into the numbers. Clemson will sign only one more player in this class, and it will be a running back. The overall number of 85 is what is holding the class size back this year. We will have a better idea of the running back class after Ettiene's visit this weekend.

Mickey, Wow, what a year and expectations for the program have never been higher, but I am tempering my enthusiasm for the coming year. I am not saying we won’t be good, but I doubt we will championship good. The main reason is chemistry. The difference this year is this team knew how to play together. There was an unspoken chemistry that didn’t need to be manufactured. There was unquestionable trust. Players trusted each other; the offense trusted the defense and vice versa; coaches and players trusted each other. Creating that takes time and this is something the 2017 team will need to learn. I believe we will win 10 games and a New Year’s day bowl, but it will take time to develop the type of trust that wins championships. The 2016 team laid the foundation for what it takes to win it all. Hard work and dedication to detail are key elements, but understanding how to trust is equally important. GO TIGERS!

Every team is different, and we won't know the chemistry until the spring and summer. Sometimes that chemistry takes time. I do like the fact that the culture is set here. Players come into this program knowing how to work and how to compete. The culture won't change. Experience at key positions like quarterback and running back will be important, but the expectations within the program won't change.