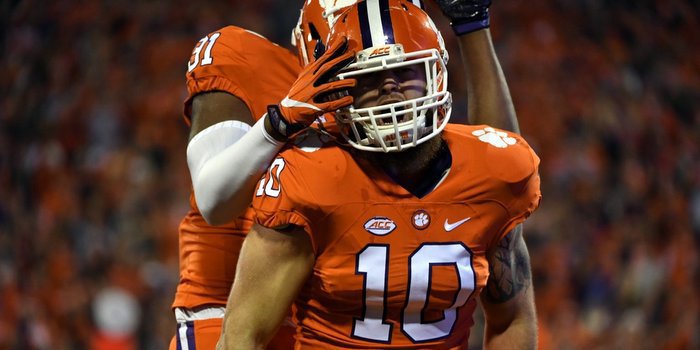 To say the Tigers dominated the chickens does not do justice to the effort Saturday night. Clearly, South Carolina is not as good as Clemson but also, Clemson finally played up to it's potential. Is the team that wore orange Saturday, the team we will see in Orlando, let's hope the answer is a loud YES.

Through the years, the Clemson-South Carolina story has been one of big swings in momentum and certainly old Mo is on the side of the Tigers now. Back in the late 90's and up until the 5 game winning streak, by South Carolina, the games were physical victories by Clemson and usually by halftime, it was easy to tell that South Carolina could not compete. For a few years, Coach Spurrier changed the talent level and made the switch to more physical players and the results changed. There is no doubt, our Tiger players are more talented, faster, and more physical than South Carolina's and hopefully will continue to be just as eager to work hard for success.

I learned many, many years ago not to say always or never and if history tells us anything about the Clemson-South Carolina series, clearly, those words do not apply. This Clemson team has given us unlimited thrills but the work is never done because coaches come and go, players come and go and so does old man momentum. Rest assured the South Carolina players are in the weight room right now and I have no doubt that their effort will be matched by the Tigers.

The opponent will be much better than what the Tigers faced last week, but I expect Clemson to play well in Orlando. The key is turnovers. When Clemson doesn't turn it over, it plays very well.

I agree that it was easy to see the difference in the talent level between Clemson and South Carolina. Clemson looked bigger, stronger, more athletic, deeper, faster and quicker than the Gamecocks.

I have seen both sides of the rivalry and know it can change. However, I don't see it changing anytime soon. Clemson is recruiting at a higher level and will continue to stockpile four and five stars. South Carolina will improve its talent level, but it will be a few years for them to catch up.

I hate to think about losing, but my guess is Clemson will make it to a New Year's Day Six bowl game. Some national writers have said the Cotton Bowl against Western Michigan.

I think we will see about 50,000 in the seats Saturday night. That would mean about 20,000 empty seats. I think the ACC made a mistake and it will hurt the bottom line this week.

The only score for USC appeared to me to be an illegal forward pass. It was set up as a jet sweep and the QB handed it off to the wideout who passed in front of the qb and then he threw it to the receiver for a touchdown. I thought a forward lateral was illegal and also thought two fwd passes were as well.Am I wrong or did the refs miss this one?

I watched the replay after reading your email, and I think it was a hand-off, so the pass was legal. Hey man, let em have one score, lol.

Dear Mickey, maybe it's just me but the Mouth Carowhiner Shamcocks talent level is equal to that of South Carolina States. Man they are really awful on both sides of the football. If you compare the 2 games they are very similar. We beat State 59-0 and the Shamecocks 56-7. Two teams, same colors, same talent , and the same results. What's are your thoughts Mickey, I enjoy your show.